Items related to THE INVENTION OF WINGS 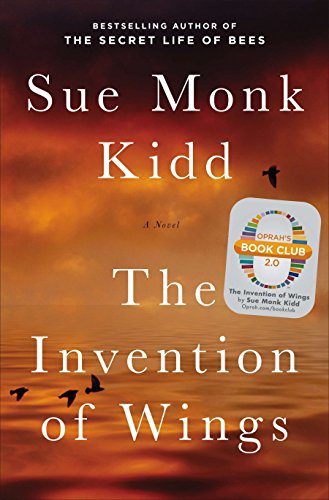 THE INVENTION OF WINGS

New novel by the author of THE SECRET LIFE OF BEES and THE MERMAID CHAIR. int, unread copy, in as new, mylar-protected dust jacket. L114/L126. Bookseller Inventory # 020699

Title: THE INVENTION OF WINGS

The #1 New York Times bestseller of hope, daring, and the quest for freedom taken on by two unforgettable American women, from the celebrated author of The Secret Life of Bees.

“A remarkable novel that heightened my sense of what it meant to be a woman – slave or free . .  a conversation changer.” – Oprah Winfrey, O, The Oprah Magazine

“Powerful...furthers our essential understanding of what has happened among us as Americans – and why it still matters.” –The Washington Post

Writing at the height of her narrative and imaginative gifts, Sue Monk Kidd presents a masterpiece of hope, daring, the quest for freedom, and the desire to have a voice in the world—and it is now the newest Oprah’s Book Club 2.0 selection.

Hetty “Handful” Grimke, an urban slave in early nineteenth century Charleston, yearns for life beyond the suffocating walls that enclose her within the wealthy Grimke household. The Grimke’s daughter, Sarah, has known from an early age she is meant to do something large in the world, but she is hemmed in by the limits imposed on women.

Kidd’s sweeping novel is set in motion on Sarah’s eleventh birthday, when she is given ownership of ten year old Handful, who is to be her handmaid. We follow their remarkable journeys over the next thirty five years, as both strive for a life of their own, dramatically shaping each other’s destinies and forming a complex relationship marked by guilt, defiance, estrangement and the uneasy ways of love.

As the stories build to a riveting climax, Handful will endure loss and sorrow, finding courage and a sense of self in the process. Sarah will experience crushed hopes, betrayal, unrequited love, and ostracism before leaving Charleston to find her place alongside her fearless younger sister, Angelina, as one of the early pioneers in the abolition and women’s rights movements.

Inspired by the historical figure of Sarah Grimke, Kidd goes beyond the record to flesh out the rich interior lives of all of her characters, both real and invented, including Handful’s cunning mother, Charlotte, who courts danger in her search for something better.

This exquisitely written novel is a triumph of storytelling that looks with unswerving eyes at a devastating wound in American history, through women whose struggles for liberation, empowerment, and expression will leave no reader unmoved.

In the early 1830s, Sarah Grimké and her younger sister, Angelina, were the most infamous women in America. They had rebelled so vocally against their family, society, and their religion that they were reviled, pursued, and exiled from their home city of Charleston, South Carolina, under threat of death. Their crime was speaking out in favor of liberty and equality and for African American slaves and women, arguments too radically humanist even for the abolitionists of their time. Their lectures drew crowds of thousands, even (shockingly, then) men, and their most popular pamphlet directly inspired Harriet Beecher Stowe’s Uncle Tom's Cabin--published 15 years later. These women took many of the first brutal backlashes against feminists and abolitionists, but even their names are barely known now. Sue Monk Kidd became fascinated by these sisters, and the question of what compelled them to risk certain fury and say with the full force of their convictions what others had not (or could not). She discovered that in 1803, when Sarah turned 11, her parents gave her the “human present” of 10-year-old Hetty to be her handmaid, and Sarah taught Hetty to read, an act of rebellion met with punishment so severe that the slave girl died of "an unspecified disease" shortly after her beating. Kidd knew then that she had to try to bring Hetty back to life (“I would imagine what might have been," she tells us), and she starts these girls' stories here, both cast in roles they despise. She trades chapters between their voices across decades, imagining the Grimké sisters’ courageous metamorphosis and, perhaps more vitally, she gives Hetty her own life of struggle and transformation. Few characters have ever been so alive to me as Hetty and Sarah. Long after you finish this book, you'll feel its courageous heart beating inside your own. -- Mari Malcolm