Items related to AN INVISIBLE SIGN OF MY OWN

Home Bender, Aimee AN INVISIBLE SIGN OF MY OWN
Stock Image 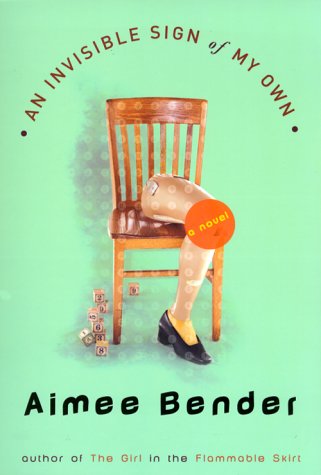 Signed by author on title page. The first novel by the author of THE GIRL IN THE FLAMMABLE SKIRT. As new, in fine, mylar-protected dust jacket. L4/L17. Bookseller Inventory # 8244

An incandescent novel by one of America's most gifted young writers.

With her stunning debut collection of stories, The Girl in the Flammable Skirt, Aimee Bender showed herself to be "a writer who makes you glad for the very existence of language" San Francisco Chronicle. The book was a sensation; it spent seven weeks on The Los Angeles Times bestseller list, received ecstatic reviews nationwide, and established Aimee Bender as one of the freshest and most original voices in American fiction.

In An Invisible Sign of My Own, Aimee Bender exceeds her early promise. She gives us the story of Mona Gray, a second-grade math teacher who has just turned twenty--a number which, like all numbers in her life, seems to have a profound significance. Mona lives her life under the shadow of her father's long, weird, unnamed illness and her own bizarre compulsions. She excels at music, running, and sex, but ceases each activity just at the moment enjoyment becomes intense: Mona is "in love with quitting."  Only numbers provide the order and beauty she craves. "Mix up some numbers and you get an equation for the way the wind shifts or an axiom for the movement of water, or the height of someone, or for how skin feels. You can account for softness. You can explain everything." With construction paper and Magic Markers, Mona arranges her classroom into "a beautiful museum of numbers," but that could also describe her life: a collection of oddities, a static place, a hushed and insular world where disruption is unwelcome. Then the science teacher arrives, with burn marks on his fingers and a genius for teaching children the joys of coughing, and Mona's strange and tidy universe is threatened by love, the supreme disorder.  In her luminous, pitch-perfect prose, Bender conjures a dream world much like our own, a fairy tale grounded in a penetrating sense of what moves the human heart.

Aimee Bender's funny, delicately shaded first novel is a constant delight, even at its most warped. An Invisible Sign of My Own tells the story of Mona Gray, a math wiz and a high school track star, whose ordinary childhood comes to pieces when her father is stricken with a mysterious illness. There doesn't seem to be a name for it, but he looks sort of gray and seems frail and unhappy. Whether there's anything really wrong with Mona's dad is unclear, but her fear that he will die, as well as his withdrawal from family life--no more vacations, no running practice with his daughter, no unplanned outings--triggers a corresponding withdrawal in her. Whenever she does well at anything, or starts to enjoy herself, she quits: piano class, dancing lessons, her first boyfriend, running.

I quit dessert to see if I could do it; of course I could; I quit breathing one evening until my lungs overruled; I quit touching my skin, sleeping with both hands under the pillow. When no one was home, I tied ropes around the piano, so that it would take me thirty minutes with scissors to get back to that minuet. Then I hid all the scissors.

Instead of working out her problems, Mona develops a habit of knocking on wood, and sometimes knocks for an hour before getting to sleep. Eating soap is her other dark indulgence: a surefire anti-aphrodisiac that she calls on whenever she feels sexually attracted to a man.

At 20, Mona is recruited to teach math at the local elementary school. To her surprise, she is a brilliant teacher, making addition and subtraction tangible to second graders with a game called Numbers and Materials, in which the students bring in natural or man-made objects that take the form of numbers. When 7-year-old Lisa Venus brings in a zero made of IV tubing from her dying mother's hospital room, Mona recognizes a kindred spirit. But she will have to be healthy herself to help Lisa resist her urge to take on her mother's illness out of grief and loyalty. The complicated connection between children and adults is the underlying theme of this big-hearted novel. However quirky and alarming Bender's methods may seem, An Invisible Sign of My Own is no darker than a fairy tale, and the witch--even if it's the witch within--is reliably vanquished in the end. --Regina Marler