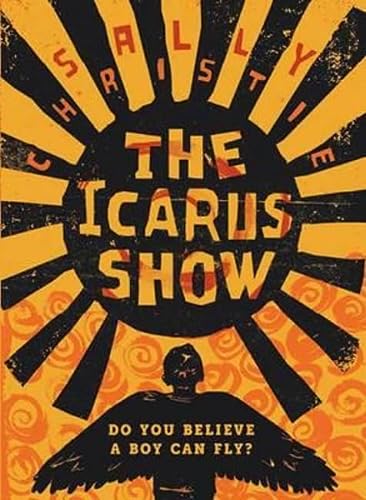 Wonder if it were written by David Almond. A powerful, deeply insightful middle grade novel that poignantly deals with themes of friendship, bullying, and loneliness.

Alex has worked out a foolproof plan to avoid being picked on. Don’t React. It’s so simple, it just might work.

David, a boy in his class, Does React. He’s branded a weirdo, becomes an outcast, and is given a terrible nickname. Alex is determined not to suffer the same fate.

But one day, Alex gets a note in his bag that forces him out of his safe little world.

Who sent the note? And is what it promises true—will a boy really fly?

The Icarus Show is a powerful story about friendship, loneliness, and a strange kind of genius.

Sally Christie's first job, nearly thirty years ago, was with a publisher of children's books. While she was there, she had a go at writing a story herself and (cunningly calling herself Syd Carter) sent it to an editor in her own office. It was accepted. She has grown up a lot since Syd: When, more recently, she completed a breathtaking story called The Icarus Show, she felt able to send it to David Fickling Books under her own name.

Book Description David Fickling Books, 2016. Hardcover. Condition: Good. Good condition is defined as: a copy that has been read but remains in clean condition. All of the pages are intact and the cover is intact and the spine may show signs of wear. The book may have minor markings which are not specifically mentioned. Most items will be dispatched the same or the next working day. Seller Inventory # mon0010931928

Book Description David Fickling Books 07/01/2016, 2016. Condition: Very Good. This book is in very good condition and will be shipped within 24 hours of ordering. The cover may have some limited signs of wear but the pages are clean, intact and the spine remains undamaged. This book has clearly been well maintained and looked after thus far. Money back guarantee if you are not satisfied. See all our books here, order more than 1 book and get discounted shipping. . Seller Inventory # 7719-9781910200483

Book Description Paperback. Condition: Very Good. The book has been read, but is in excellent condition. Pages are intact and not marred by notes or highlighting. The spine remains undamaged. Seller Inventory # GOR007786030

Book Description David Fickling Books 07/01/2016, 2016. Hardcover. Condition: Very Good. Shipped within 24 hours from our UK warehouse. Clean, undamaged book with no damage to pages and minimal wear to the cover. Spine still tight, in very good condition. Remember if you are not happy, you are covered by our 100% money back guarantee. Seller Inventory # 6545-9781910200483

Book Description David Fickling Books, 2016. Hardcover. Condition: Used; Good. **Simply Brit** Shipped with Premium postal service within 24 hours from the UK with impressive delivery time. We have dispatched from our book depository; items of good condition to over ten million satisfied customers worldwide. We are committed to providing you with reliable and efficient service at all times. Seller Inventory # 2111834

Book Description David Fickling Books, 2016. Condition: Good. Ships from the UK. Former Library book. Shows some signs of wear, and may have some markings on the inside. Seller Inventory # GRP95381624

Book Description 2016. Hardcover. Condition: New. Hardcover. Alex's motto is Don't react-that's how you stay safe at school. But one day he finds a feather in his bag, with a note. A note telling him a boy is going to fly soon. And so begins the gam.Shipping may be from multiple locations in the US or from the UK, depending on stock availability. 265 pages. 0.310. Seller Inventory # 9781910200483