Items related to Idiot Beating "The Curse" and Enjoying the... 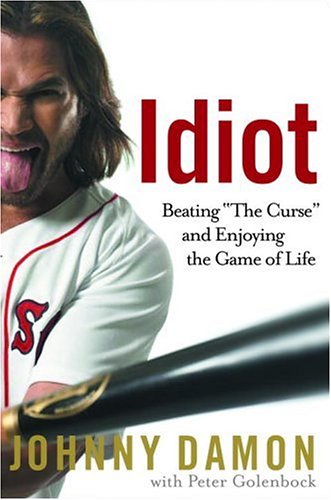 Idiot Beating "The Curse" and Enjoying the Game of Life

Title: Idiot Beating "The Curse" and Enjoying the ...

I know what you’re thinking: Couldn’t he have come up with a better title? My mother agrees with you, but unfortunately Genius just doesn’t have the same ring.

Let’s get something straight right away. I may be an idiot, but I’ve tried to do more in this book than just revisit the Red Sox’s Miracle Season. I want to give you a sense of what it’s like to grow up with baseball dreams, to spend long years climbing the ladder, and then over the course of three years to see the building blocks of those dreams fall into place.

In this book, you’ll be reading about the son of an Army staff sergeant—a thrill-seeking Orlando kid who at age thirteen was gifted with a man’s body, including rare speed and reflexes. It was some straight talk from my brother that kept me from abandoning that talent, which led to my eventually catching on with the Kansas City Royals and later the Oakland A’s.

Starting in 2002 with the Red Sox, I got to see what can happen when a determined front office decides to roll the dice and acquire players who, like me, leave the thinking out of it—who trust their instincts and play team baseball.

Forget what you’ve read about the posse of long-haired rebels who eventually made up the 2004 Red Sox. I’ll give you the straight dope, including who’s got the biggest mouth (hint: his first name is Kevin); what Pedro Martinez was doing all those times when you couldn’t find him on the bench; what game David Ortiz should never play; and why I sometimes question Curt Schilling’s sanity. Memo to Curt: the statue of you is being erected.

What’s it like being responsible for the hopes of millions? In the fall of 2004 my teammates and I got to find out. What I’ve tried to do in these pages is bring you inside, show you the black humor that erupted when it seemed we could do nothing right, and the immense joy that followed when 25 guys took turns picking each other up, and by sheer force of will reached baseball’s summit.

Red Sox Nation (both natives and new arrivals), this one’s for you.

From Idiot by Johnny Damon...

On what it takes to make the majors... “It’s never about your talent. Everybody in the minor leagues has talent. If you’re planning on building a career in baseball on just talent alone, you’ve got no chance. Most important, you need will. You’ve got to work harder than the next guy, and you have to want it more than the next guy. Guys who make it do so with their heart and mind.”

On Nomar...“It was virtually impossible for Nomar to go out in public. If he went, he needed a private room or he had to be shielded by the other players so the public wouldn’t get to him. Nomar had to deal with his superstar status every day. If one fan wanted an autograph, there’d be a hundred behind him. Nomar spent much of his time in his room getting food delivered. It was the only way he could get to eat.”

On “The Curse”...“When you got down toward the end of the season, that’s all you heard about...‘Do you believe in the curse?’ ‘Is the curse overtaking the team?’...Since Dan Shaughnessy is the guy who invented this curse nonsense in the first place, I find it kind of odd that he keeps talking about it. He’s a bright guy. I can’t believe he actually believes it. I guess the Curse of the Bambino has a better ring to it than the Curse of Dan Shaughnessy.”

On getting support from the fans during the ALCS slump...“I went out into the field, expecting to hear it from the Fenway Fans. But we have some really great fans there in center field. ‘Johnny, we’re all right,’ they said. ‘Just get the job done next time.’ ‘Come on, let’s go, John. The game’s not over. Make something happen.’...I didn’t hear one nasty comment...I was pumped. They were rooting us on.”

On valuing the game...“I think back to that day Damian Jackson and I collided in Oakland. Before that...I said I was going to retire if I won a World Series. But now, having had that experience and almost having the game taken away from me, when I think about it, I cry, because I don’t ever want to leave this game. I know the day will come and I won’t be ready. This game is so precious and meaningful to me.”

Johnny Damon is beginning his eleventh year playing Major League baseball. A feared contact hitter and base stealer, Damon is only one of four players in baseball history to drive in more than 90 runs from the leadoff position. He lives with his wife, Michelle, in Central Florida and has a twin boy and girl.

Peter Golenbock has written numerous New York Times bestsellers, among them The Bronx Zoo with Sparky Lyle, #1 with Billy Martin, and Balls with Graig Nettles.


CWO/Visa/MC/AMEX.
All books carefully packaged and promptly shipped.
Subject to prior sale. Returns accepted if notified within 10 days.
DJ's of most titles over $10.00 in Brodart covers.