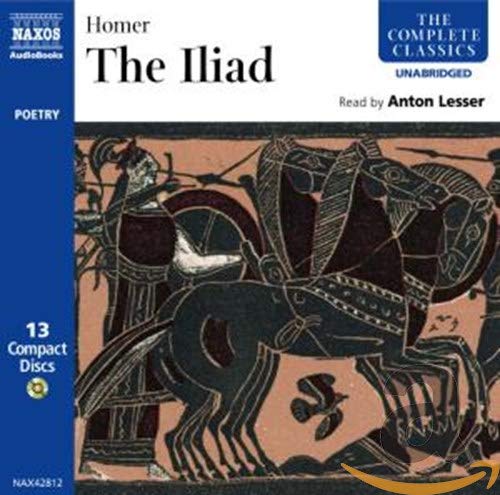 Tells the story of fifty critical days towards the end of the Trojan war. Achilles has quarrelled with Agamemnon and sulks in his tent, while Hector brings his Trojans to the brink of victory; but fate will have the last word. Translator(s): Johnston, Ian. BIC Classification: DC. Category: (G) General (US: Trade). Dimension: 143 x 163 x 53. Weight in Grams: 414. . 2006. Unabridged. Audio CD. . . . . Books ship from the US and Ireland. Bookseller Inventory # V9789626344286

Synopsis: Presents the centuries-old epic about the wrath of Achilles.

First Seven Lines of the Iliad: This reconstruction is based on what we know about the earliest Greek orthography. The Walls of Troy: The translator standing before the walls of the sixth city at Troy. The Judgment of Paris: On the right a youthful Paris sits on a stone in a rural location. The sheep near his feet indicates that he is a shepherd. Athenian red-figure water jar, c. 450 BC. The Rage of Achilles: The seated Agamemnon holds the scepter of authority and sits on a throne, his lower body wrapped in a robe. Athena seizes Achilles from behind by the hair. Roman mosaic from Pompeii, c. First Century AD. The Wedding of Zeus and Hera: A half-naked Zeus, sitting on a rock, clasps the wrist of Hera. One of her breasts is exposed as Hera removes her head covering in a traditional gesture of submission. c. 540 BC Hephaistos Prepares Arms for Achilles: The smithy-god, bearded and wearing a felt cap, sits in an elaborately draped hall on a platform holding a cloth with which he is polishing the finished shield. Between him and Thetis are the breastplate and the shinguards (the surface of the fresco is damaged here). From Pompeii, c. AD 60.
"About this title" may belong to another edition of this title.