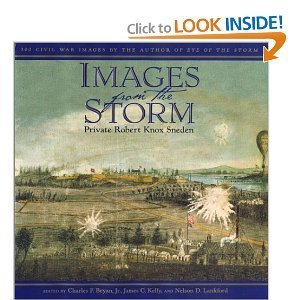 Images from the Storm

Synopsis: A retrospective study of the work of Robert Knox Sneden continues with this publication of hundreds more images from the Union cartographer's collection of Civil War sketches, engravings, and maps.

Review: If Vietnam was the first television war, the Civil War was the first to use mass-produced battlefield sketches and drawings as adjuncts to news reports, filling the pages of publications such as Harper's and Frank Leslie's Illustrated Weekly. One illustrator, a Union private named Robert Sneden, had plenty of opportunities to practice his art at close range, turning out nearly a thousand sketches, maps, and plans of the great battles in which he participated.

Images from the Storm, the follow-on from last year's bestselling Eye of the Storm, gathers more than 300 of those images that Sneden made of clashes at Second Manassas, Malvern Hill, Antietam, Yorktown and others. Some of the images are panoramic, capturing miles-long lines of infantry and cities under siege; others depict smaller scenes of war, such as dancing "contraband," or freed slaves, and the graves of the fallen. Of particular interest to historians are Sneden's drawings of the Confederate prison camps at Richmond and, notoriously, Andersonville, where he spent much of the year 1864 after he was captured by John Singleton Mosby's cavalry at Brandy Station, Virginia. One of those images became nationally known after the war, note the book's editors, accompanying an account of the war crimes trial and subsequent execution of the Andersonville camp commander.

These works, one scholar has noted, constitute "the single most important collection of Civil War art to be discovered in this century." Students of that conflict will find this critical edition to be of much interest and use as a companion to other accounts. --Gregory McNamee

1. Images from the Storm

Book Description New Line Books. Hardcover. Condition: Good. A copy that has been read, but remains in clean condition. All pages are intact, and the cover is intact. The spine may show signs of wear. Pages can include limited notes and highlighting, and the copy can include previous owner inscriptions. At ThriftBooks, our motto is: Read More, Spend Less. Seller Inventory # G1597640549I3N00

2. Images from the Storm