Items related to Indians, Settlers, and Slaves in a Frontier Exchange... 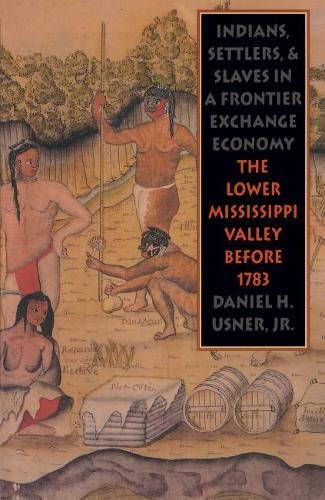 Indians, Settlers, and Slaves in a Frontier Exchange Economy: The Lower Mississippi Valley Before 1783

Title: Indians, Settlers, and Slaves in a Frontier ...

In this pioneering book Daniel Usner examines the economic and cultural interactions among the Indians, Europeans, and African slaves of colonial Louisiana, including the province of West Florida. Rather than focusing on a single cultural group or on a particular economic activity, this study traces the complex social linkages among Indian villages, colonial plantations, hunting camps, military outposts, and port towns across a large region of pre-cotton South.Usner begins by providing a chronological overview of events from French settlement of the area in 1699 to Spanish acquisition of West Florida after the Revolution. He then shows how early confrontations and transactions shaped the formation of Louisiana into a distinct colonial region with a social system based on mutual needs of subsistence. Usner's focus on commerce allows him to illuminate the motives in the contest for empire among the French, English, and Spanish, as well as to trace the personal networks of communicatio

"Breaks new ground, not only in Louisiana or Mississippi Valley history, but in the evolution of interdisciplinary historical research and writing. Usner skillfully blends perspectives from social history, ethnohistory, environmental history, and the new military history, as well as economics, geography, and other traditional disciplines into a study that will influence the field for many years to come."-- Louisiana History