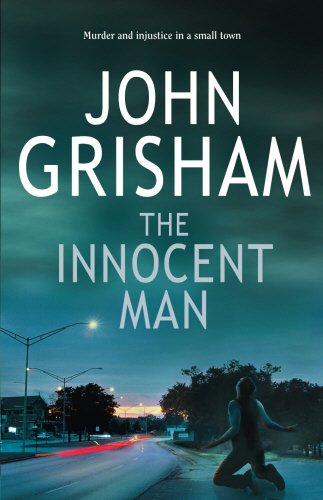 Review: John Grisham tackles nonfiction for the first time with The Innocent Man, a true tale about murder and injustice in a small town (that reads like one of his own bestselling novels). The Innocent Man chronicles the story of Ron Williamson, how he was arrested and charged with a crime he did not commit, how his case was (mis)handled and how an innocent man was sent to death row. Grisham's first work of nonfiction is shocking, disturbing, and enthralling--a must read for fiction and nonfiction fans. We had the opportunity to talk with John Grisham about the case and the book, read his responses below. --Daphne Durham 20 Second Interview: A Few Words with John Grisham

Q: After almost two decades of writing fiction, what compelled you to write non-fiction, particularly investigative journalism?
A: I was never tempted to write non-fiction, primarily because it's too much work. However, obviously, I love a good legal thriller, and the story of Ron Williamson has all the elements of a great suspenseful story.

Q: Why this case?
A: Ron Williamson and I are about the same age and we both grew up in small towns in the south. We both dreamed of being major league baseball players. Ron had the talent, I did not. When he left a small town in 1971 to pursue his dreams of major league glory, many thought he would be the next Mickey Mantle, the next great one from the state of Oklahoma. The story of Ron ending up on Death Row and almost being executed for a murder he did not commit was simply too good to pass up.

Q: How did you go about your research?
A: I started with his family. Ron is survived by two sisters who took care of him for most of his life. They gave me complete access to the family records, photographs, Ron's mental health records, and so on. There was also a truckload of trial transcripts, depositions, appeals, etc., that took about 18 months to organize and review. Many of the characters in the story are still alive and I traveled to Oklahoma countless times to interview them.

Q: Did your training as a lawyer help you?
A: Very much so. It enabled me to understand the legal issues involved in Ron's trial and his appeals. It also allowed me, as it always does, to be able to speak the language with lawyers and judges.

Q: Throughout your book you mention, The Dreams of Ada: A True Story of Murder, Obsession, and a Small Town. How did you come across that book, and how did it impact your writing The Innocent Man?
A: Several of the people in Oklahoma I met mentioned The Dreams of Ada to me, and I read it early on in the process. It is an astounding book, a great example of true crime writing, and I relied upon it heavily during my research. Robert Mayer, the author, was completely cooperative, and kept meticulous notes from his research 20 years earlier. Many of the same characters are involved in his story and mine.

Q: You take on some pretty controversial and heated topics in your book--the death penalty, prisoner’s rights, DNA analysis, police conduct, and more--were any of your own beliefs challenged by this story and its outcome?
A: None were challenged, but my eyes were open to the world of wrongful convictions. Even as a former criminal defense attorney, I had never spent much time worrying about wrongful convictions. But, unfortunately, they happen all the time in this country, and with increasing frequency.

Q: So many of the key players in this case are either still in office or practicing attorneys. Many family members and friends still live in the same small town. How do you think The Innocent Man will impact this community and other small rural towns as they struggle with the realities of the justice system?
A: Exonerations seem to be happening weekly. And with each one of them, the question is asked--how can an innocent man be convicted and kept in prison for 20 years? My book is the story of only one man, but it is a good example of how things can go terribly wrong with our judicial system. I have no idea how the book will be received in the small town of Ada, Oklahoma, or any other town.

Q: What do you hope your readers will take away from The Innocent Man?
A: A better understanding of how innocent people can be convicted, and a greater concern for the need to reimburse and rehabilitate innocent men after they have been released.

Book Description Paperback. Condition: Very Good. The book has been read, but is in excellent condition. Pages are intact and not marred by notes or highlighting. The spine remains undamaged. Seller Inventory # GOR000346544

Book Description Century, 2007. Paperback. Condition: Used; Good. **Simply Brit** Shipped with Premium postal service within 24 hours from the UK with impressive delivery time. We have dispatched from our book depository; items of good condition to over ten million satisfied customers worldwide. We are committed to providing you with reliable and efficient service at all times. Seller Inventory # BB00038619B

Book Description Century, 2007. Paperback. Condition: Used; Good. **SHIPPED FROM UK** We believe you will be completely satisfied with our quick and reliable service. All orders are dispatched as swiftly as possible! Buy with confidence!. Seller Inventory # mon0001685396

Book Description Century 07/06/2007, 2007. Condition: Very Good. Shipped within 24 hours from our UK warehouse. Clean, undamaged book with no damage to pages and minimal wear to the cover. Spine still tight, in very good condition. Remember if you are not happy, you are covered by our 100% money back guarantee. Seller Inventory # 6545-9781846051487

Book Description Century 07/06/2007, 2007. Condition: Very Good. This book is in very good condition and will be shipped within 24 hours of ordering. The cover may have some limited signs of wear but the pages are clean, intact and the spine remains undamaged. This book has clearly been well maintained and looked after thus far. Money back guarantee if you are not satisfied. See all our books here, order more than 1 book and get discounted shipping. . Seller Inventory # 7719-9781846051487

Book Description Century, 2007. Paperback. Condition: Used; Good. Dispatched, from the UK, within 48 hours of ordering. This book is in good condition but will show signs of previous ownership. Please expect some creasing to the spine and/or minor damage to the cover. Damaged cover. The cover of is slightly damaged for instance a torn or bent corner. Aged book. Tanned pages and age spots, however, this will not interfere with reading. Seller Inventory # CHL5220017

Book Description Century, 2007. Paperback. Condition: Used; Good. Dispatched, from the UK, within 48 hours of ordering. This book is in good condition but will show signs of previous ownership. Please expect some creasing to the spine and/or minor damage to the cover. Grubby book may have mild dirt or some staining, mostly on the edges of pages. Seller Inventory # CHL5521299

Book Description DE33. Paperback. Condition: Good. A copy that has been read, but remains in clean condition. All pages are intact, and the cover is intact. The spine may show signs of wear. Pages can include limited notes and highlighting, and the copy can include previous owner inscriptions. At ThriftBooks, our motto is: Read More, Spend Less. Seller Inventory # G1846051487I3N00

Book Description DE33. Paperback. Condition: Good. A copy that has been read, but remains in clean condition. All pages are intact, and the cover is intact. The spine may show signs of wear. Pages can include limited notes and highlighting, and the copy can include previous owner inscriptions. At ThriftBooks, our motto is: Read More, Spend Less. Seller Inventory # G1846051487I3N00