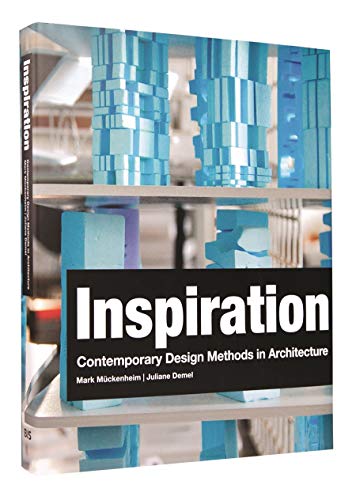 Language: English. Brand new Book. Design methodology in architecture and design has changed significantly over the last ten years, taking on major significance. More than ever, graphic attributes are used in contemporary architecture. A number of these new design methods and applications emerged through the use of digital media, leading to a paradigm shift in the way we design.BIS Publishers has already showcased these new design methods in a series of small books on form experiments in architecture and design, such as Folding Architecture and Supersurfaces (Vyzoviti) and Modular Structures (Agkatidis), but no comprehensive book on the topic had been published until now.Inspiration: Contemporary Design Methods in Architecture is a comprehensive compilation of work samples and ideas on design and gestalt, illustrations and graphic configurations, textures and structures, as well as form and spatial development. This book features more than 800 examples of abstract compositions that relate to architectural design methods and principles. These methodologies find their ground in the work of contemporary architectural design practice, while still being highly applicable to other related creative fields. Inspiration showcases hundreds of examples, models, sketches, and renderings of abstract architectural design applications. In addition to this substantial body of visual work, the book also documents and details the generative process and production of these design creations. Bookseller Inventory # HUK9789063692674

Inspiration provides a comprehensive overview of new design methods and techniques that are emerging in the field of architecture. Many of these design methods make use of digital media and computer algorithms. Some already existed for a long time, but are reinvented in new ways, like design by folding paper materials. These new methodologies have changed the way architects and students design.

The book showcases hundreds of examples, models, sketches, and renderings of architectural designs within dozens of different methodologies, including:

Mark Mückenheim is founder and principal of FRAMA Architects BDA in Duesseldorf, Germany, and a visiting professor for architectural design at the Technical University Munich. He has lectured and acted as a guest critic at numerous institutions in Germany and abroad. Among other schools, he taught for more than six years at the distinguished RWTH Aachen before being appointed as a visiting professor at the TU Munich in 2009. Educated in Germany, the United States, and England, sponsored by a Fulbright scholarship and a DAAD grand, Mückenheim received his Master of Architecture from Parsons School of Design, New York, and his Graduate Diploma in Architecture at the Bartlett School of Architecture, University College London.

Juliane Demel is an assistant professor and research assistant at the Architecture department, chair for principles of architectural design at the Technical University Munich. Before her teaching engagement at the TUM, she worked at CAUPD in Beijing, where she conducted a research on Chinas sustainable development for the reconstruction of the earthquake effected area Beichuan under sustainable aspects. After studying in Germany and at the University of Auckland in New Zealand, she received her Diploma in Architecture and Urban Design from the University Braunschweig, Germany.

Given the scarce nature of many of the books offered by this store, Orders usually ship within 5-15 business days. Book Depository is an international bookseller. We ship our books to over 100 countries around the globe and we are always looking to add more countries to the list. We really, really love books and offer millions of titles, currently over 10 million of them, with this figure increasing daily. Living by our motto, 'Bookseller to the World', we focus on offering as many titles as possible to as many customers as possible. Most of the within books offered within this ?Hard to find? store are dispatched within 10 - 15 business days of your order. Apart from publishers, distributors and wholesalers, we even list and supply books from other retailers! We hope you enjoy our selection and discover your new favourite book.


All books are shipped in new condition. We are happy to accept returns within 30 days of receipt. Given the scarce nature of many of our books, orders placed with ?Book Depository hard to find? usually ship within 5-15 business days. Domestic Shipments are sent by Royal Mail, and International by Priority Airmail. Please contact the seller directly if you wish to return an order. Name of business: The Book Depository Ltd Form of legal entity: A Limited Company Business address: The Book Deposito...


Given the scarce nature of many of the books offered by this store, Orders usually ship within 5-15 business days. Domestic Shipments are sent by Royal Mail, and International by Priority Airmail. We are happy to accept returns within 30 days of receipt. Please contact the seller directly if you wish to return an order.