Home Rob Merkin Insurance and the Law of Obligations 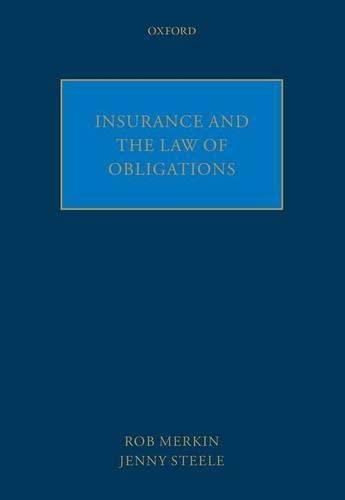 Insurance and the Law of Obligations

Synopsis: It is widely acknowledged that insurance has a major impact on the operation of tort and contract law regimes in practice, yet there is little sustained analysis of their interaction. The majority of academic private lawyers have little knowledge of insurance law in its own right, and the amount of discussion directed to insurance in private law theory is disproportionately small in relation to its practical importance. Filling this substantial gap in the literature, this book explores the multiple influences of insurance in the law of obligations, and the nature and impact of insurance law as an inherent and significant aspect of private law. It combines conceptual and doctrinal analysis, informing the theoretical discussion of the nature of private law, including the role of judicial and public purpose, and the place of formalism and of contextualism in normative theories of private law.

Jenny Steele is a Professor of Law at York Law School, University of York. She is the author of Tort Law: Text, Cases, and Materials (OUP, 2nd ed. 2010); and Risks and Legal Theory (Hart, 2004), and is a contributing editor to Clerk and Lindsell on Torts (from the 20th edition). She edited Law in Environmental Decision-Making (OUP, 1995), with Tim Jewell, and is editor, with Willem van Boom, of a collection of essays entitled Mass Justice: Challenges of Representation and Distribution (Edward Elgar, 2011) and, with TT Arvind, of Tort Law and the Legislature: Common Law, Statute, and the Dynamics of Legal Change (Hart, 2012). She is the holder of a Leverhulme Major Research Fellowship, Liability, Insurance and Society.

1. Insurance and the Law of Obligations

2. Insurance and the Law of Obligations (Hardback)

Book Description 2020. Condition: NEW. 9780199645749 This listing is a new book, a title currently in-print which we order directly and immediately from the publisher. Print on Demand title, produced to the highest standard, and there would be a delay in dispatch of around 10 working days. For all enquiries, please contact Herb Tandree Philosophy Books directly - customer service is our primary goal. Seller Inventory # HTANDREE01547442

3. Insurance and the Law of Obligations

4. Insurance and the Law of Obligations (Hardback)

Shipping: US$ 32.30
From Spain to U.S.A.
Destination, rates & speeds
#renderBDPScripts()