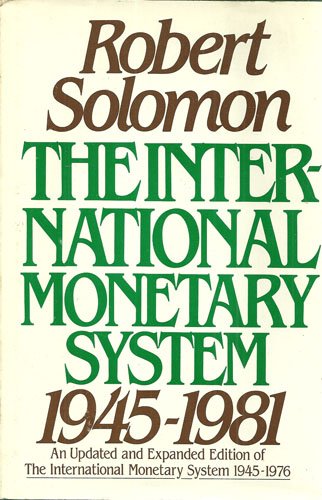 Synopsis: An updated and expanded edition of The International Monetary System, 1945-1976. This is the most authoritative account we have of the great trek from Bretton Woods to Jamaica. As a key official of the Federal Reserve Board, the author was deeply involved in most of the episodes of crisis and reform in the 1960s and 1970s. There are no indiscreet revelations but simply first-hand details, sharp appraisals of some leading participants and, above all, good economics and clear writing. The step-by-step treatment that combines narrative and analysis will make the book a major reference work for a long time to come. -- William Diebold, Jr.

Book Description HarperCollins 1982-05-01, 1982. Hardcover. Condition: Good. Item is in good condition. Some moderate creases and wear. This item may not come with CDs or additional parts including access codes for textbooks. Might be an ex-library copy and contain writing/highlighting. Seller Inventory # DS-0060150041-3

Book Description Harper & Row, NY, 1982. Hardcover. Condition: Very Good. Dust Jacket Condition: Very Good-. Revamped Editiion. 0060150041; Very minor wear on the clean, sound binding. Very minor edge foxing. Contents are almost as new. Very minor wear and soil on the complete DJ. (LR-1-D) . ; First Printing of the Updated and Expanded edition of THE INTERNATIONAL MONETARY SYSTEM, 1945-1976. 9-3/8" Tall, XVI + 432pp. Full green cloth, bright silver spine lettering. HISTORY. "In this updated account of the international monetary system from 1945 through 1981, Mr. Solomon analyzes and appraises floating exchange rates. He also assesses the impact on the world economy of the latest oil shock, and simultaneous inflation and recession. He gives us a look at what the future may hold for the system to which all our fortunes are inextricably linked. A unique blend of history, memoir and analysis, this book demonstrates a remarkable understanding of the perceptions, objectives and actions of officials of the United States, of other industrial nations, and of the third world. As the definitive book on the subject it is required reading for government officials, bankers, corporate executives, academicians, students, and general readers who have an interest in the future of international economic and monetary affairs. " . The Chapters: The International Monetary System - What it is and why it matters; Recovery and renewal - The system from Bretton Woods to the end of the 1950s; The first half of the 1960s; The United States on the defensive; Stirrings of international monetary reform; The travail of sterling, 1964-1968; The build-up of monetary crisis - The United States, Germany, and Japan; The great gold rush of 1967-1968; Gestation and birth of the SDR, 1965-1969; The 'Events of May' 1968 in France and the French-German currency crises; The exchange rate system - A reform that failed; The road to Camp David; From Camp David to the Smithsonian - August-December 1971; The crumbling of the Smithsonian Agreement, 1972-1973; International monetary reform - The Committee of Twenty, 1972-1974; Further evolution of the International Monetary System; Inflation, recession, and stagflation in the 1970s; The impact of OPEC; Living with floating exchange rates; The present and future of the system. Includes an International Monetary Chronology, Source Notes, and an Index. (LR-1-D) . Seller Inventory # 41071

Book Description Condition: Very Good. A quality text at a great price. And we ship fast. CDs & Access codes may not be included as is the case with most used books. Seller Inventory # 2327002