Items related to Intimate Warfare: The True Story of the Arturo Gatti... 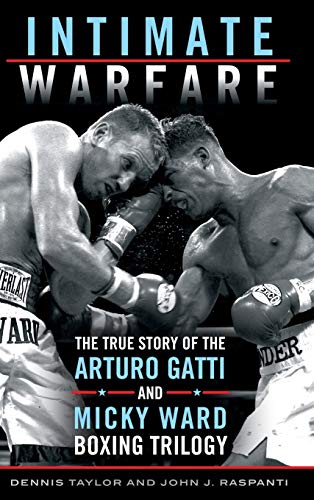 This book tells the story of the greatest blood-and-guts rivalry in the history of boxing, the spectacular trilogy of fights between Arturo "Thunder" Gatti and "Irish" Micky Ward. It paints a vivid portrait of these two charismatic boxers, tracing their lives, careers, and the unlikely friendship they formed despite their brutal fights. Num Pages: 204 pages, 16 black & white halftones, 6 tables. BIC Classification: BGS; WSTB. Category: (G) General (US: Trade). Dimension: 160 x 238 x 26. Weight in Grams: 464. . 2016. Hardcover. . . . . Books ship from the US and Ireland. Bookseller Inventory # V9781442273054

Title: Intimate Warfare: The True Story of the ...

Intimate Warfare: The True Story of the Arturo Gatti and Micky Ward Boxing Trilogy traces the lives and careers of two legendary fighters—Micky Ward, a humble, hardscrabble, blue-collar Irishman from Lowell, Massachusetts, and Arturo Gatti, a handsome, flashy, charismatic Italian-born star who was raised in Montreal. Dennis Taylor and John J. Raspanti paint a vivid portrait of these two fighters who ushered each other into boxing lore and formed an unlikely friendship despite their brutal battles in the ring. Gatti’s life would end tragically and mysteriously just a few years later, but his name and Ward’s remain tied together in boxing history.

In Intimate Warfare, each of the three spectacular fights between Gatti and Ward, two of which were named The Ring magazine’s “Fight of the Year,” are described in detail. Multiple photographs from the trilogy highlight the intensity and power of these epic collisions. With a foreword by former world champion and International Boxing Hall of Famer Ray “Boom Boom” Mancini, this book will be of interest to all fans of boxing.

Dennis Taylor is a professional journalist of more than 40 years. He is the editor/publisher of www.ringsideboxingshow.com and host of The Ringside Boxing Show, a worldwide Internet radio program. He has also written for www.boxing.com and www.ringtv.com. Taylor is the author of A Puncher's Chance: Amazing Tales from the Ringside Boxing Show, a nonfiction boxing book, and The Miracle Myth, a novel.

John J. Raspanti is Chief Lead Writer for both www.maxboxing.com and www.doghouseboxing.com. A well-known boxing writer, Raspanti has also contributed to The Ring online (www.ringtv.com).