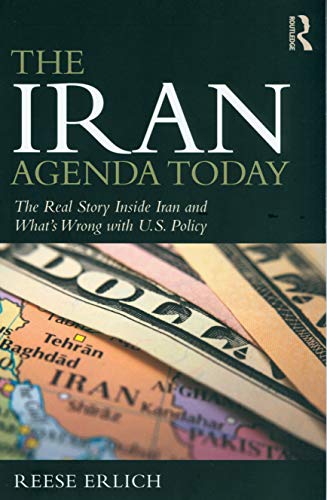 The Iran Agenda Today: The Real Story Inside Iran and What's Wrong with U. S. Policy

Author's name inked on title page. Cover is crisp and inside is clean and unmarked. Seller Inventory # 1129215

Based on frequent, first-hand reporting in Iran and the United States, The Iran Agenda Today explores the turbulent recent history between the two countries and reveals how it has led to a misguided showdown over nuclear technology. Foreign correspondent Reese Erlich notes that all the major U.S. intelligence agencies agree Iran has not had a nuclear weapons program since at least 2003. He explores why Washington nonetheless continues with saber rattling and provides a detailed critique of mainstream media coverage of Iran. The book further details the popular protests that have rocked Tehran despite repression by the country’s Deep State.

In addition to covering the political story, Erlich offers insights on Iran’s domestic politics, popular culture, and diverse populations over this recent era. His analysis draws on past interviews with high-ranking Iranian officials, the former shah’s son, Reza Pahlavi, and Iranian exiles in Los Angeles, as well as the memory of his trip to Tehran with actor Sean Penn.

Reese Erlich has authored five books on foreign affairs, including the national bestseller Target Iraq: What the News Media Didn’t Tell You (co-authored with Norman Solomon). A freelance print and broadcast reporter, he has covered the Middle East since 1987 and reported from Iran since 2000.

Erlich began his journalism career in 1968 as a staff writer and research editor for Ramparts, an investigative reporting magazine based in San Francisco. He taught journalism for ten years at San Francisco State University and California State University, East Bay. His reporting appears in Foreign Policy, Vice News, and The Progressive. He writes the syndicated column "Foreign Correspondent." His radio work airs on CBC/Radio-Canada, Reveal, and National Public Radio, among others.

Erlich earned a Peabody Award in 2007 and "best depth reporting" awards in 2002 and 2006 from the Society of Professional Journalists (Northern California). He has also received awards from Project Censored, the Chicago International Film Festival, and the Association for Women in Communication. He lives in Oakland, California.

Book Description Paperback. Condition: As New. No Jacket. Pages are clean and are not marred by notes or folds of any kind. ~ ThriftBooks: Read More, Spend Less. Seller Inventory # G1138599069I2N00

2. The Iran Agenda Today: The Real Story Inside Iran and What's Wrong with U.S. Policy

3. The Iran Agenda Today: The Real Story Inside Iran and What's Wrong with U.S. Policy