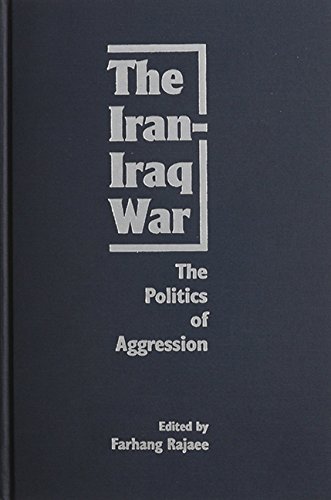 The Iran-Iraq War: The Politics of Aggression

Synopsis: "Informative, well argued, intelligent, easy to read. It is necessary to publish it to avoid the perpetuation of major misunderstandings about the history of the Islamic Republic of Iran."--Yann Richard, Centre National de la Recherche Scientifique, Paris
Before the Iraqi invasion of Kuwait in August 1990, international experts from Iran, Europe, the United States, and throughout the Middle East assessed the nature of Iraqi aggression against Iran in an international conference in Tehran. Under the pretext of territorial claims, that invasion in 1980 launched a revolution, one that in turn became a conventional war with international dimensions as it extended to the oil-rich Persian Gulf.

For scholars and general readers who seek to unravel some of the complexities in the Middle East, this collection analyzes the causes and consequences of the Iran-Iraq war not only from the standpoint of the belligerent parties but from the perspective of Islamic and international law.
Contents
Introduction, Farhang Rajaee
"Iraqi Attitudes and Interpretation of the 1975 Agreement" by Ibrahim Anvari Tehrani
"Analyses of the Risks of War: Iran-Iraq Discord, 1979-1980" by Keith McLachlan
"The War of the Cities" by S. Taheri Shemirani
"Cultural Identity in Danger" by Mehdi Hojjat
"The Impact of the War on Iraq" by Laith Kubba
"War Responsibility: Governments or Individuals?" by Abdolrahman Alem
"The USSR and the Iran-Iraq War: From Brezhnev to Gorbachev" by Mohiaddin Mesbahi
"Saudi Arabia and the United States: Partnership in the Persian Gulf" by A. Reza Sheikholeslami
"U.S. Reflagging of Kuwaiti Tankers" by Elizabeth Gamlen and Paul Rogers
"International Law: Observations and Violations" by Bahman Baktiari
"The UN Secretary-General: Attitudes and Latitudes" by Paul Tavernier
"The Inherent Right of Individual Self-Defense in the Iran-Iraq War" by Djamchid Momtaz
"The Problem of Retaliation in Modern Warfare from the Point of View of Fiqh" by Hamid Algar
"Morale vs. Technology: The Power of Iran in the Persian Gulf War" by James A. Bill
"Aggression in Historical Perspective" by Richard Bulliet
"The Need for Modification and Development of the Laws of War in Modern International Law" by Saeid Mirzaee Yengejeh
Farhang Rajaee is senior research fellow at the Cultural Studies and Research Institute in Tehran, the author of Islamic Values and World View, and the editor of What Is to Be Done, a collection of essays.

1. The Iran-Iraq War: The Politics of Aggression

2. The Iran-Iraq War: The Politics of Aggression

3. The Iran-Iraq War: The Politics of Aggression

4. The Iran-Iraq War - The Politics of Aggression

5. The Iran-Iraq war : the politics of aggression / edited by Farhang Rajaee

6. The Iran-Iraq war : the politics of aggression / edited by Farhang Rajaee