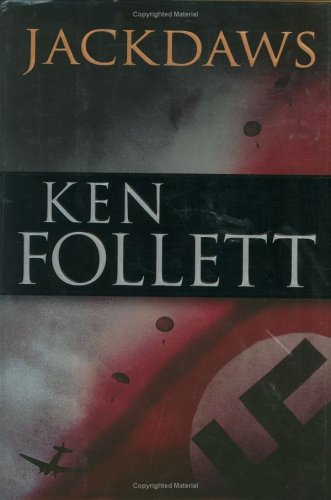 Signed by author in blue fountain ink on title page. Author of THE EYE OF THE NEEDLE, THE KEY TO REBECCA, CODE TO ZERO, THE THIRD TWIN, JACKDAWS, WHITEOUT, THE PILLARS OF THE EARTH, WORLD WITHOUT END, and many others. Author is the 2013 co-winner (together with Margaret Maron) of the prestigious Grand Master award given annually by the Mystery Writers of America for lifetime achievement. As new, unread copy, in fine, mylar-protected dust jacket. MBS2. Bookseller Inventory # 5089

With the Allies preparing for the invasion of Nazi-occupied Europe, Felicity "Flick" Clariet, an agent in the ranks of the British Special Operations Executive, is given the job of destroying German lines of communications, but when her mission goes tragically wrong, she is forced to enlist the aid of an all-woman team, none professionals, to take on the suicidal task. 500,000 first printing.

Penzler Pick, November 2001: Each book by Ken Follett, one of the most successful suspense writers of our time, is a welcome event. With Jackdaws, he returns to his most successful era, the darkest days of World War II.

It is 1944 and the Allies are preparing for the invasion of Europe. In the occupied town of Sainte-Cecile, the French Resistance is preparing to blow up the chateau that now houses the crucial telephone exchange connecting the French telephone system to that of Germany. Bombers have been unable to inflict enough damage on the chateau to disrupt communications for more than a few hours at a time, but the Allies need to make sure that communications is down for longer so that there will be as little warning of the invasion as possible.

Felicity Clariet, known as Flick, is a British secret agent patrolling the streets around the chateau waiting for the first explosions that will give the signal for the attack to begin. She is married to Michel, a Resistance fighter. When the operation goes horribly wrong, they barely escape with their lives and Flick returns to her home in London--but not for long. When Flick returns to France it will be as part of an audacious, quickly assembled plan to put female spies in the chateau as telephone operators and cleaners, enabling the Allies to destroy the ability of the Exchange to warn Germany in advance of the landing on the beaches of Normandy. The twists and turns of the plot will keep you on the edge of your seat.

Follett tells us that Jackdaws is based on a true story. The Special Operations Executive sent 50 women into France as secret agents. Thirty-six survived. --Otto Penzler