Items related to JAMES CONANT AND THE BIRTH OF THE NUCLEAR AGE: From...

Home Hershberg, James JAMES CONANT AND THE BIRTH OF THE NUCLEAR AGE: From Harvard to ...
Stock Image 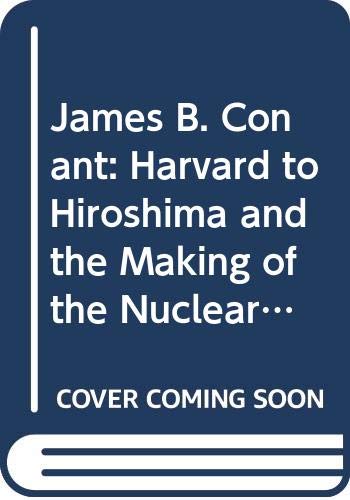 JAMES CONANT AND THE BIRTH OF THE NUCLEAR AGE: From Harvard to Hiroshima

Title: JAMES CONANT AND THE BIRTH OF THE NUCLEAR ...

James B. Conant was one of the giants of the American establishment. In this monumental biography, the first ever written, James G. Hershberg gives us the life of the renowned educator and scientist who led the U.S. government's effort to develop weapons of mass destruction, and whose own story mirrors America's transition from isolationism to global superpower at the dawn of the nuclear age.
Here is the full scope of Conant's astonishing life. Born in a working-class suburb of Boston, he demonstrated a remarkable aptitude in science that won him the chance to study chemistry at Harvard, where academic distinction led to a professorship. Then, in 1933, when this son of a photoengraver seemed a likely prospect for a Nobel Prize, Conant tearfully left his laboratory to assume the presidency of Harvard, the pinnacle of American education. It was during his tenure as president that his life took an even more amazing turn: in 1941, as science adviser to FDR, he was given the secret assignment of determining whether or not the atomic bomb could or should be built. Drawn out of the secure confines of the university, Conant entered public life at one of the most tumultuous and uncertain moments in American history and remained, for the next dozen years, among a handful of government advisers intimately involved in the decisions relating to nuclear weapons. He administered the Manhattan Project and witnessed the July 1945 Trinity test at Alamogordo, New Mexico, where for a horrifying instant he believed the world was literally coming to an end before his eyes; and that same summer, while serving on a secret panel, it was Conant who made the fateful recommendation to use the new weapon, without warning, on a Japanese city. Finally, in 1952, he left the "bad business" of nuclear policy-making after he and J. Robert Oppenheimer lost a bitter fight to prevent the building of the hydrogen bomb.
Thereafter, in public and in private, Conant wrestled with the terrible implications of the power he had taken part in unleashing, never to erase the terrifying awareness that he had helped humanity usher into existence the means of its own annihilation. Yet his fear of nuclear catastrophe did not prevent him from becoming one of the first of the Cold War warriors, an advocate of stern military measures and global interventionism aimed at protecting the postwar order from Communism. And when McCarthyism threatened American universities, Conant struggled to balance the supposedly conflicting imperatives of academic freedom and national security. As Eisenhower's representative in Germany during the mid-1950s he swallowed private doubts and oversaw the rearmament of that nation - whose menace had impelled the development of the bomb only a decade earlier - against a new enemy: the Soviet Union.
Integrating a wealth of previously classified information with original research, this penetrating and compellingly written biography illuminates a deeply enigmatic and pivotal figure who was a key force in shaping U.S. nuclear, scientific, foreign, and educational policies for almost half a century. James B. Conant peels back layers of government and institutional secrecy and the personal reticence of its subject to reveal the life and times of an exceptional man who achieved much, at great personal cost, and whose career - its accomplishments, limitations, and failures - helped define the American century.

“This splendid portrait of Conant . . . illuminates the life of a pivotal figure in the making of U.S. nuclear, scientific, educational, and foreign policy for almost half a century. But the book is much more: it is not only an insightful narration of Conant’s life, it is also a brilliant and important account of the making of the nuclear age, a chronicle that contains much that is new.”—Washington Post
“The bomb would be as much Conant’s as it was anyone’s in government. His inner response to that burden of responsibility has long been obscured, but it is illumined here. . . . This is a model of historiography that is evocative reading.” —New York Times Book Review