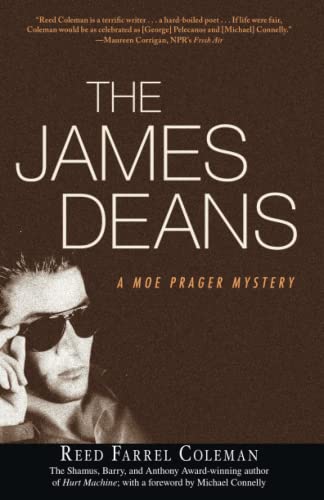 Synopsis: Still reeling from his wife's recent miscarriage, Moe Prager is bullied into taking the case of an up-and-coming politico whose career has stalled over the suspicious disappearance of a young woman. It's been almost two years since Moira Heaton, State Senator Steven Brightman's intern, vanished on Thanksgiving Eve 1981. In spite of Brightman's best efforts to clear his name, he has been tried and convicted in the press. As a reluctant Moe peels away the layers of the case, he discovers the tragic circumstances of Moira Heaton's disappearance are buried deep in the past and that there is another more heinous crime at the heart of it all. Will the ugly truth set Brightman free or will it bury all the players beneath the crumbling artiface of corruption, murder, and hate?

About the Author: Reed Farrel Coleman is a New York Times bestselling author that has been called a "hard-boiled poet" by NPR's Maureen Corrigan and the "noir poet laureate" in The Huffington Post. He has published more than twenty-five previous novels, including novels in Robert Parker’s Jesse Stone series, the critically acclaimed Moe Prager series, and the Gus Murphy series. A three-time winner of the Shamus Award, he has also won the Anthony, Macavity, Barry, and Audie Awards. He lives with his family on Long Island.

Book Description Gallery Books, 2012. Condition: Good. A+ Customer service! Satisfaction Guaranteed! Book is in Used-Good condition. Pages and cover are clean and intact. Used items may not include supplementary materials such as CDs or access codes. May show signs of minor shelf wear and contain limited notes and highlighting. Seller Inventory # 1440563861-2-4

Book Description Adams Media Corporation. Paperback. Condition: Good. A copy that has been read, but remains in clean condition. All pages are intact, and the cover is intact. The spine may show signs of wear. Pages can include limited notes and highlighting, and the copy can include previous owner inscriptions. At ThriftBooks, our motto is: Read More, Spend Less. Seller Inventory # G1440563861I3N00

Book Description Gallery Books, 2012. Paperback. Condition: Good. Connecting readers with great books since 1972. Used books may not include companion materials, some shelf wear, may contain highlighting/notes, may not include cdrom or access codes. Customer service is our top priority!. Seller Inventory # S_280527849

There are 17 more copies of this book