Items related to Jack: A Life Like No Other

Home Geoffrey Perret Jack: A Life Like No Other
Stock Image 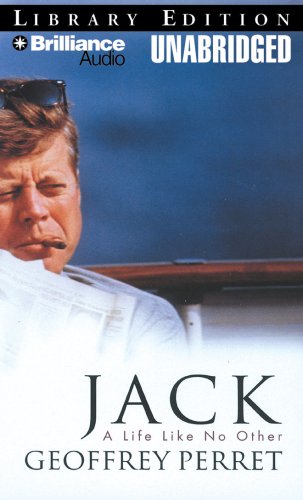 There has been no complete biography like this one. Jack deals with the full scope of Kennedy's life - his family, his friends, his infidelities. There's much to say, much culled from hundreds of hours of tapes from the Oval Office. Through painstaking research, Geoffrey Perret located thousands of revealing documents on national security issues and foreign affairs, subjects to which Kennedy devoted most of his time and energy. All of the documents from the Assassination Records Review Board are now available as well, and Perret has mined the Kennedy Library in a way few others have, finding letters and diaries that have never before seen the light of day. But perhaps most important here is the narrative ability of Perret. With style and substance, he brings to life again the man who left such an indelible impression on our century.

Written with commendable measure, Geoffrey Perret's Jack: A Life Like No Other is an informal but informed cradle-to-grave biography of JFK. Though Perret hardly ignores the intricacies of Kennedy's uneven and truncated presidency--specifically the cold war imbroglios of Southeast Asia, Berlin, and Cuba, as well as intractable domestic festerings of poverty and civil rights--his real interest lies with the man himself. Kennedy, in chronic ill health from childhood, emerges here as a singular and daunting contradiction, at once cautious and impulsive, generous and selfish. He was a brat and a man of the people, an inveterate womanizer and a devoted family man, well-read but hardly intellectual, a charmer with a ferocious temper. Perret's book--utilizing heretofore-unseen documents--is refreshingly candid and felicitously nonjudgmental. Neither hagiographical, mean-spirited, salacious, nor conspiratorial, Jack, rich in anecdotes, is a welcome, evenhanded addition to the Kennedy library. --H. O'Billovitch