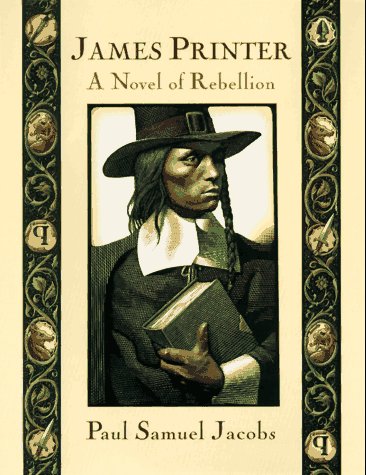 James Printer: A Novel of Rebellion

Synopsis: Learning bookmaking in his father's print shop in 1674, young Bartholomew Green is placed under the tutelage of James, a Nipmuck Indian and skilled printer, and James must choose sides when war erupts between the Boston settlers and the local tribes.

From School Library Journal: Grade 5-9. In 1675, King Philip's War erupted in New England, wreaking havoc on colonists and Indians alike. Bartholomew Green, the young narrator of this novel, describes the effect of this war on his family?and particularly on his father's Indian apprentice, James. As the war progresses, James is viciously attacked by cruel Captain Moseley, runs away, and is captured and unjustly imprisoned. After his release, James joins King Philip as an interpreter and scribe. He helps free Bartholomew's cousin Annie from captivity, turns himself in to colonial authorities, and is exiled. At book's end, Bartholomew, now grown and a printer like his father, asks James to join him in producing an Indian psalm book. Naive, innocent Bartholomew is an intriguing contrast to the older James, who is trusting and lighthearted as the story opens, but wary and somber when the war concludes. This is an interesting and unusual tale about a little-known segment of American history. Issues of prejudice and loyalty, violence and peace, faith and honor permeate the book. Unfortunately, it loses its immediacy and drama in the later chapters as too many events are either related secondhand or piled on top of one another with little discussion. Jacobs is also black-and-white in his presentation of the colonists. They're either Indian-lovers and good, like the Greens, or Indian-haters and evil, like Moseley. Although James's difficulties in choosing sides are well examined, the author doesn't delve into the genuine conflicts the English might feel. Despite these weaknesses, James Printer remains a thought-provoking study of colonial America.?Ann W. Moore, Schenectady County Public Library, NY
Copyright 1997 Reed Business Information, Inc.

Book Description Scholastic, Incorporated. Library Binding. Condition: Fair. A readable copy. All pages are intact, and the cover is intact. Pages can include considerable notes-in pen or highlighter-but the notes cannot obscure the text. An ex-library book and may have standard library stamps and/or stickers. At ThriftBooks, our motto is: Read More, Spend Less. Seller Inventory # G0590163817I5N10

2. James Printer: A Novel of Rebellion

3. James Printer: A Novel of Rebellion

4. James Printer: A Novel of Rebellion

Book Description Scholastic, 1997. Condition: Good. A+ Customer service! Satisfaction Guaranteed! Book is in Used-Good condition. Pages and cover are clean and intact. Used items may not include supplementary materials such as CDs or access codes. May show signs of minor shelf wear and contain limited notes and highlighting. Seller Inventory # 0590163817-2-4

5. James Printer A Novel Of Rebellion

6. James Printer: A Novel of Rebellion

7. James Printer: A Novel of Rebellion

8. James Printer: A Novel of Rebellion

Book Description Scholastic, U.S.A., 1997. Hardcover. Condition: Good. Dust Jacket Condition: Good. 1st Edition. 0590163817 This is a former library book with the usual identifiers, Hardcover. It's 1675 and Bartholomew Green is a printer's devil in his fathers print shop in Cambridge, Massachusetts, he sorts type, runs and fetches, sweeps and scrubs. And he learns bookmaking from a master apprentice James Printer, who is Bartholomew's friend as well as his teacher. All books shipped within 24 hours with U.S. Postal Service Delivery Confirmation, each order is packaged in a new box with bubble wrap, and always your satisfaction is guaranteed. Seller Inventory # 015905

9. JAMES PRINTER; A NOVEL OF REBELLION