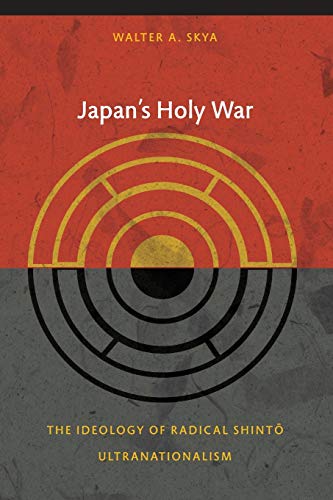 Japan’s Holy War reveals how a radical religious ideology drove the Japanese to imperial expansion and global war. Bringing to light a wealth of new information, Walter A. Skya demonstrates that whatever other motives the Japanese had for waging war in Asia and the Pacific, for many the war was the fulfillment of a religious mandate. In the early twentieth century, a fervent nationalism developed within State Shintō. This ultranationalism gained widespread military and public support and led to rampant terrorism; between 1921 and 1936 three serving and two former prime ministers were assassinated. Shintō ultranationalist societies fomented a discourse calling for the abolition of parliamentary government and unlimited Japanese expansion.

Skya documents a transformation in the ideology of State Shintō in the late nineteenth century and the early twentieth. He shows that within the religion, support for the German-inspired theory of constitutional monarchy that had underpinned the Meiji Constitution gave way to a theory of absolute monarchy advocated by the constitutional scholar Hozumi Yatsuka in the late 1890s. That, in turn, was superseded by a totalitarian ideology centered on the emperor: an ideology advanced by the political theorists Uesugi Shinkichi and Kakehi Katsuhiko in the 1910s and 1920s. Examining the connections between various forms of Shintō nationalism and the state, Skya demonstrates that where the Meiji oligarchs had constructed a quasi-religious, quasi-secular state, Hozumi Yatsuka desired a traditional theocratic state. Uesugi Shinkichi and Kakehi Katsuhiko went further, encouraging radical, militant forms of extreme religious nationalism. Skya suggests that the creeping democracy and secularization of Japan’s political order in the early twentieth century were the principal causes of the terrorism of the 1930s, which ultimately led to a holy war against Western civilization.

""Japan's Holy War "is an absolutely outstanding and necessary work, a major contribution to international scholarly debate. Walter A. Skya gives the most convincing account to date of Shintō's ideological implications. His book will become the standard work on the intellectual and ideological history of modern Shintō."--Klaus Antoni, University of Tubingen