Items related to The Jefferson National Forest: An Appalachian Environmental... 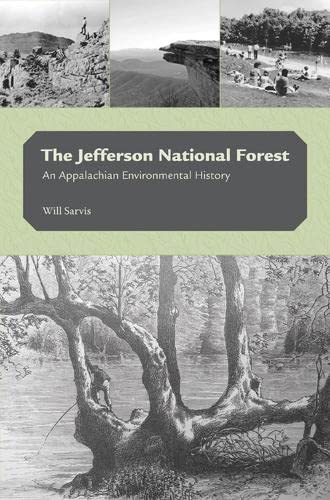 Title: The Jefferson National Forest: An ...

The highland forests of southwestern Virginia were a sacred land to Native Americans and one they relied upon for sustenance. After European contact, this beautiful country drew successive waves of settlers and visitors, and for a brief yet intense period, industrialists rapaciously exploited its timber resources, particularly in the higher elevations where the woodlands had survived the nearby valleys’ generations of agricultural use. This is the story of how various peoples have regarded this land over the centuries and how, starting in the early twentieth century, the federal government acquired 700,000 acres of it to create what is now the Jefferson National Forest (JNF).
Will Sarvis’s in-depth history explores the area’s significance to such native tribes as the Cherokee and Shawnee, for whom it functioned as a buffer zone in late prehistory, and its attraction for nineteenth-century romantics who, arriving in stagecoaches, became the area’s first tourists. Aggressive commercial logging gave way to the arrival of the U.S. Forest Service, which patched the JNF together through successive purchases of privately owned land and instituted a more regulated harvesting of various timber resources. Public support for Forest Service policy during the Depression and World War II was followed by controversies, including the use of eminent domain. In presenting this history, Sarvis probes the many complexities of land stewardship and, in analysis that is sure to spark debate, discusses how and why the JNF could abandon clear-cutting and return to traditional selective tree management.
An ongoing experiment in democratic land use, the JNF contains many lessons about our relationship with the natural environment. This book delineates those lessons in a clear and compelling narrative that will be of great interest to policy makers, activists, and indeed anyone drawn to American environmental history and Appalachian studies.

WILL SARVIS is a history teacher at Lane Community College in Eugene, Oregon, and was the historian of the Jefferson National Forest from 1991 to 1993. He is author of Borderland Mogul: J.V. Conran, African American Influence, and Politics in Rural Missouri (forthcoming).