Items related to José Lezama Lima, Poet of the Image (UNIVERSITY OF... 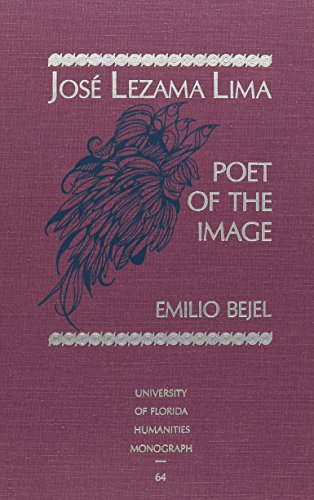 “A stimulating and rigorous analysis of one of Spanish America’s most difficult and complex writers. Bejel’s sophisticated reading of Lezama’s texts and his skillful treatment of ‘image’....make this book a significant addition to Lezama studies.” –Justo C. Ulloa, Virginia Polytechnic Institute and State University The richly imagined work of twentieth-century Cuban poet, novelist, and essayist Lezama Lima (1910-76) has substantially influenced Cuban and Latin American literature for the last several decades. Only the second book of Lezama in English, Bejel’s work is the most complete to date in any language on Lezama’s canon—collections of poetry and essays, two novels, and numerous short stories, each a part of what Lezama calls his “Poetic System of the World.” Bejel’s study gives special consideration to the writer’s articulation of this system in the interplay of subject, writing, nature, and history. The thematic thread that weaves the study together, however, is Lezama’s vision of the Image as the creative power stemming from a lack of natural order, a theme Bejel develops in close, insightfulreadings of a selection of Lezama’s major works: two poems, “Death of Narcissus” and “Rhapsody for the Mule,” two novels, Paradiso and Oppiano Licario, and essays, The American Expression among others. Bejel also places Lezama and his work in their artistic, cultural, and political contexts: Nietzsche, Heidegger, Joyce, and Proust, the Machado and Batista eras, the Cuban Revolution. “Only the difficult is stimulating,” Lezama contended, and Bejel in this study has succeeded in making Lezama’s notoriously complex work accessible. This addition to the University of Florida Humanities Monograph Series will interest not only students of Latin American literature but also the broader community of scholars investigating modern poetics.