Home Matthew Frank If I Should Die (Joseph Stark Series) 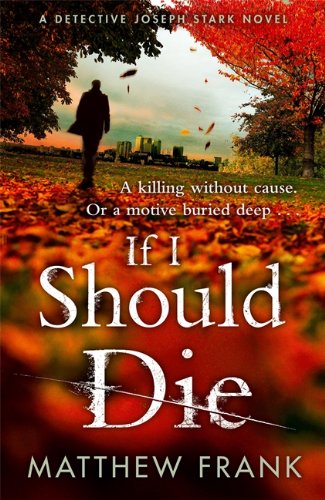 If I Should Die (Joseph Stark Series)

Synopsis: This book is the Winner of the 2014-2015 Waverton Good Read Award. If I Should Die is the astounding debut from British author Matthew Frank. It begins with vicious, apparently motiveless attacks on down and outs in South London. But when one of the homeless victims dies from his wounds, it's murder...For the Met investigation team's newest member, Joseph Stark, death is already all too familiar. Injured in an attack that killed his fellow soldiers and tortured by nightmares since he returned, Afghan veteran Stark has enough on his hands just trying to recover without enduring the scrutiny and sideways glances of his new colleagues. The drink and painkillers he's leaning on to keep going aren't helping. And there's only so long he can ignore the efforts of the Ministry of Defence to speak to him. When one of the victims of the attacks fights back it's soon clear that there's much more at stake than gangs preying randomly on society's weakest members. But as Stark hunts down the truth - and the rotten heart of the crimes - his own strength is fading. It seems that the ex-soldier's determination to see justice done may not, this time, be enough to carry him through. If I Should Die is the first title in a new crime series, and outstanding characterization, pitch perfect dialogue and precision plotting mark out Matthew Frank as a debut writer to watch. With the introduction of series character and ex-soldier police detective Joseph Stark, fans of Ian Rankin's Rebus novels will be hooked from the word go. Praise for If I Should Die: "A gripping murder story...Frank brilliantly maintains a balance between the demands of a complex plot and his character's difficulty in returning to civilian life...an accomplished first novel." (Sunday Times). "Well researched and totally convincing, this is the first of several Stark books. Great news if they're as good as this." (Sunday Mirror). "A very powerful novel. The writing is so good that it is difficult to believe that this is a debut." (New Books Magazine). "A highly assured debut...we'll look forward to the next." (Crime Fiction Lover). "A great debut introducing an unusual lead character - I'm looking forward to reading more in the series." (5*s - Novel Heights). "Brilliantly written." (Oodals Blog). Matthew Frank lives in Kent with his wife and three young sons. Between family life and work as an architect he tries to squeeze in a bit of mountain biking, scuba diving and midnight writing. If I Should Die is his first novel.

About the Author: Matthew Frank lives in Kent with his wife and three young sons. Between family life and work as an architect he tries to squeeze in a bit of mountain biking, scuba diving and midnight writing. If I Should Die is his first novel. Find out more at www.matthewfrank.co.uk

Book Description Michael Joseph, 2014. Hardcover. Condition: Good. Dust Jacket Condition: Includes dust jacket. Ex Library Book with usual stamps and stickers. Good condition book. Slight shelfwear to the dust jacket. Good condition is defined as: a copy that has been read but remains in clean condition. All of the pages are intact and the cover is intact and the spine may show signs of wear. The book may have minor markings which are not specifically mentioned. Most items will be dispatched the same or the next working day. Seller Inventory # mon0013042007

Book Description Paperback. Condition: Very Good. The book has been read, but is in excellent condition. Pages are intact and not marred by notes or highlighting. The spine remains undamaged. Seller Inventory # GOR005933678

Book Description Paperback. Condition: Good. The book has been read but remains in clean condition. All pages are intact and the cover is intact. Some minor wear to the spine. Seller Inventory # GOR005872000

5. If I Should Die (Joseph Stark series)

Book Description Michael Joseph, 2014. Hardcover. Condition: Used; Good. **SHIPPED FROM UK** We believe you will be completely satisfied with our quick and reliable service. All orders are dispatched as swiftly as possible! Buy with confidence!. Seller Inventory # 1937609

Book Description Michael Joseph, 2014. Hardcover. Condition: Used; Acceptable. Dust jacket is damaged **Simply Brit** Shipped with Premium postal service within 24 hours from the UK with impressive delivery time. We have dispatched from our book depository; items of good condition to over ten million satisfied customers worldwide. We are committed to providing you with reliable and efficient service at all times. Seller Inventory # 2956507

Book Description Penguin, 2014. Condition: Good. Ships from the UK. Former Library book. Shows some signs of wear, and may have some markings on the inside. Seller Inventory # GRP82699611

Book Description Michael Joseph Ltd, 2014. Hardcover. Condition: As New. Dust Jacket Condition: As New. 1st Edition. An excellent UK first edition/ first print hardback in an unblemished dust-wrapper (fitted with a removable, clear, thin film protector).The book has been signed & dated(05/06/2014) directly to the title page by Matthew Frank. The book is unread and in very fine/very fine condition. Please note all of my books are securely wrapped and shipped with care in protective packaging within 2 working days. Signed by Author(s). Seller Inventory # 000272