Items related to Joyce and the Jews: Culture and Texts (Florida James... 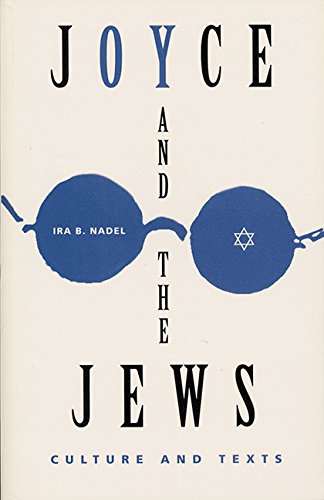 Joyce and the Jews: Culture and Texts (Florida James Joyce)

Title: Joyce and the Jews: Culture and Texts (...

From reviews of the first edition:
"The first book-length effort to lay out the pieces of Joyce's complicated affinities with the Jews. . . . Joyce saw in language per se something of the power, the magic, that energized much of Judaic study. And it is here that Nadel's study strikes me as both more sophisticated in its scholarly approach and more knowledgeable about the connectors between Joyce and Judaism than previous critics. . . . Nadel's thesis makes good sense--both in Joycean and in Judaic terms. Indeed, it is this happy combination that makes Joyce and the Jews worth 're-joycing' about."--Sanford Pinsker, Modern Judaism
"As Ira Nadel amply demonstrates, Joyce's affinities with the Jews, whether in their way of life or in their beliefs, impinged upon his personal and artistic development. Why Joyce ever identified with the Jews--a central question never systematically studied before--forms the subject matter of this carefully documented and ably argued book."--Dominic Manganiello, James Joyce Quarterly
"A short, lucid book filled with detailed accounts of Jewish history and culture, which are adroitly linked to Joyce's biography, letters, the books in his library, notebooks, notesheets, drafts, and his novels. Ira Nadel . . . writes clearly, moves nimbly, argues incisively. . . . He also extends the reach of the tradition that Joyce strove to escape, expose, parody, and undermine."--Richard Pearce, James Joyce Literary Supplement
"Provides us with a very informed description of just how exactly Jewish Bloom is, what he knows and doesn't know of his heritage, how he loves and hates it, accepts and rejects it, quotes and misquotes its literature. And, most importantly, Nadel shows us how important the Talmud is as a model of the Wake."--Terrence Doody, Novel
James Joyce, an Irish Catholic by upbringing, was described as "the greatest Jew of all" by his countryman and fellow writer Frank O'Connor. In this exploration of Joyce's identity with Jews and their cultural heritage, Ira Nadel's thesis is that Joyce's Judaism is textual, his Jewishness cultural. Beginning with a narrative of the exodus undertaken by Joyce in 1904 when he left Ireland, Nadel examines parallels between Joycean and Judaic concepts of history, typology, and cultural identity. He also reviews major Jewish events that occurred in each of the cities where Joyce lived. Ira B. Nadel is professor of English at the University of British Columbia. He is the author of Biography: Fiction, Fact, and Form and the coeditor of many books, including Orwell: A Reassessment; Gertrude Stein and The Making of Literature; and Victorian Biography: A Collection of Essays from the Period. His biography of singer/songwriter Leonard Cohen has just been published.