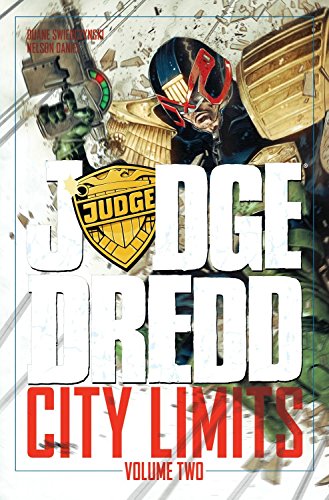 Synopsis: In the 22nd century, crime runs rampant in Mega-City One, home to over 800 million citizens, robots, criminals, and lunatics. The only line of defense between order and chaos are... the Judges. Writer Duane Swierczynski and artist Nelson Dániel continue with stories such as "The American Way of Death," "Black Light District," and "Mega-City Manhunt" from issues #13–30 of the Judge Dredd series. Also contains short stories from artists John Stanisci, Staz Johnson, Andy Belanger, Steve Scott, and Shane Pierce.

About the Author: Duane Swierczynski is the author of several crime thrillers, including the the Shamus Award-winning Fun and Games, the first in the Charlie Hardie series published by Mulholland Books, as well as the Edgar-nominated and Anthony Award-winning Expiration Date. Many of these books are currently in development for film and TV. He currently writes the IDW series Judge Dredd, the Valiant Comics series Bloodshot, the forthcoming Dark Horse series X, and has written about the Punisher, Birds of Prey, Godzilla, Cable, the Immortal Iron Fist, Werewolf By Night, Black Widow and Deadpool. Duane has also collaborated with CSI creator Anthony E. Zuiker on a series of bestselling “digi-novels” which include Level 26: Dark Origins, Dark Prophecy, and Dark Revelations.
In a previous life, Duane was the editor-in-chief of the Philadelphia City Paper, and has worked as an editor and writer at Men's Health, Details, and Philadelphiamagazines. In a previous, previous life, Duane, then known as "Cliff Dohower," died of tuberculosis in Wisconsin in 1957.

Book Description IDW Publishing, 2016. Paperback. Condition: GOOD. Has little wear to the cover and pages. Contains some markings such as highlighting and writing. Seller Inventory # 1631407708_abe_gd

Book Description IDW Publishing, 2016. Condition: Good. A+ Customer service! Satisfaction Guaranteed! Book is in Used-Good condition. Pages and cover are clean and intact. Used items may not include supplementary materials such as CDs or access codes. May show signs of minor shelf wear and contain limited notes and highlighting. Seller Inventory # 1631407708-2-4

Book Description IDW Publishing 2016-11-22, 2016. Paperback. Condition: Good. Item is in good condition. Some moderate creases and wear. This item may not come with CDs or additional parts including access codes for textbooks. Might be an ex-library copy and contain writing/highlighting. Seller Inventory # DS-1631407708-3