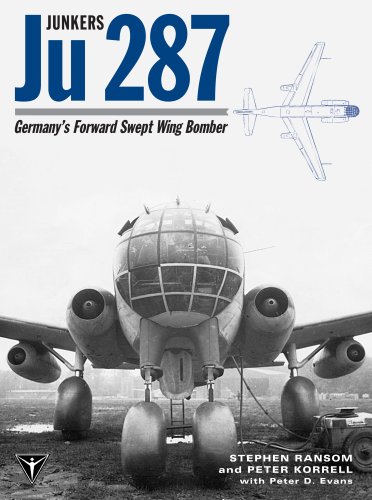 Synopsis: The extraordinary Junkers Ju 287, the first truly swept-winged, jet-powered aircraft, took to the sky in August 1944, at a time when Germany was suffering sustained round-the-clock bombing by the Allied air forces. Despite such adverse development conditions, this large and futuristic aircraft represented a remarkable accomplishment in aeronautical design. It was a flying test bed built to develop the technology required for a multi-engined jet bomber aircraft and was powered by four Junkers Jumo 004 engines.Featuring a revolutionary swept forward wing and built largely from scavenged components from other aircraft, it was designed and came to fruition very quickly, using parts of a Heinkel He 177 and a Junkers Ju 88 bomber. The project was considered 'top secret' and evaded Allied intelligence for many months.This exciting new book is beautifully illustrated throughout with striking photographs, several of which are previously unpublished, and contains much new and revised information on the Ju 287. It is certain to become the definitive account of this remarkable aircraft. The authors also trace the development of forward swept-winged aircraft prior to its appearance, the aircraft's subsequent history in the Soviet Union, its post-war influence on aircraft projects, and designs produced in Germany. A unique and compelling account for all aviation enthusiasts.

About the Author: Stephen Ransom was born in Oxfordshire, England, and studied aeronautical engineering at the University of Salford. He was employed by various companies advanced projects offices in the aircraft industry, and also worked for some time in the space industry. He has a deep interest in the history of British and German aviation.

Book Description Ian Allan Publishing, 2008. Condition: Good. A+ Customer service! Satisfaction Guaranteed! Book is in Used-Good condition. Pages and cover are clean and intact. Used items may not include supplementary materials such as CDs or access codes. May show signs of minor shelf wear and contain limited notes and highlighting. Seller Inventory # 190322392X-2-4