Items related to DIE UPON A KISS: A Novel of Suspense

Home Hambly, Barbara DIE UPON A KISS: A Novel of Suspense
Stock Image 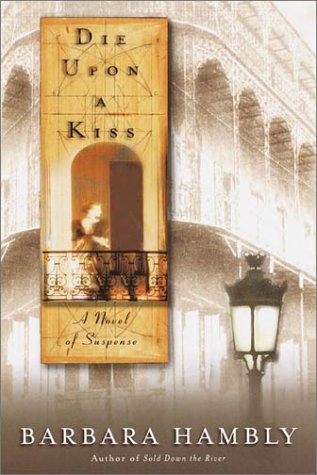 DIE UPON A KISS: A Novel of Suspense

Title: DIE UPON A KISS: A Novel of Suspense

In A Free Man of Color and Sold Down the River, Benjamin January guided readers through the seductive maze of New Orleans' darkest quarters. Now January joins the orchestra of the city's top opera house — only to become enmeshed in a web of hate and greed more murderous than any drama onstage.

In 1835, the cold February streets glitter with masked revelers in Carnival costumes. An even more brilliant display is promised at the American Theater, where impresario Lorenzo Belaggio has brought the first Italian opera to town. But it's pitch-black in the muddy alley outside the stage door when Benjamin January, coming from rehearsal with the orchestra, hears a slurred whisper, sees the flash of a knife, and is himself wounded as he rescues Belaggio from a vicious attack.

The bombastic impresario first accuses two of his tenors, then suspects his rival, the manager of New Orleans' other opera company. Could competition for audiences really provoke such violent skulduggery? Or has Belaggio taken too many chances in the catfight between two sopranos, one superseded by the other as his mistress and his prima donna?

But burning in January's mind and heart is a darker possibility. The opera Belaggio plans to present — a magnificent version of Othello — strikes a shocking chord in this culture. Is the murderous tragedy of the noble Moor and his lady, the spectacle of a black man's passion for a white beauty, one that some Creole citizen — or American parvenu — would do anything to keep off the stage?

Bloody threats and voodoo signs, poison and brutal murder seem to implicate many strange bedfellows. And Benjamin must discover who — in rage, retribution, or an insidious new commerce in this beautiful cutthroat city — will kill and kill ... and who will Die Upon a Kiss.

"As with the other entries in this popular series, the background is a hook on which Hambly hangs her main theme -- the conflicts of a society based on race, sex and class. ... The Benjamin January series is well worth reading for the depth and richness of the author's historical research and her exquisite evocation of the Byzantine class structure, exotic culture and menacing politics of antebellum New Orleans."
-- Publishers Weekly
Praise for Barbara Hambly's Sold Down the River:

A Free Man of Color

"Magically rich and poignant ... In scene after scene researched in impressive depth and presented in the cool, clear colors of photography, Hambly creates an exotic but recognizable environment for January's search for justice."
-- Chicago Tribune

A New York Times Notable Book of the Year

"A notable writer of mystery fiction ... This one grips the reader from start to finish."
-- The Washington Times

"From the highborn Creoles in their river mansions to the uncivilized Americans brawling on the levee, Hambly speaks all their languages, knows all their secrets, and brings them all to life."
-- The New York Times Book Review