Items related to The Key of Solomon the King: Clavicula Salomonis 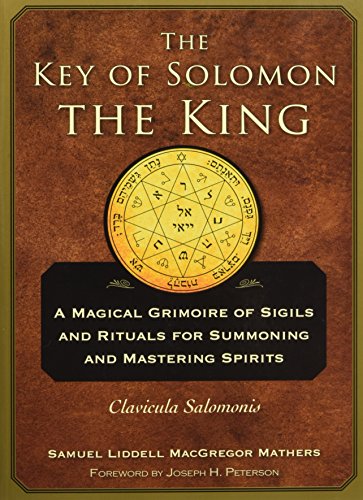 The Key of Solomon the King: Clavicula Salomonis

Title: The Key of Solomon the King: Clavicula ...

A magical grimoire of sigils and rituals for summoning and mastering spirits, The Key of Solomon the King is the most famous, or infamous, of all magick books. It has influenced everything from the revival of magick and the Western Mystery Traditions (tarot, alchemy, astrology, etc.) to fictional works such as Lovecraft's The Necronomicon.

Purported to have been penned by King Solomon himself, the book provides instruction for incantations, rituals, and sigils used to call upon and control spirits and demons. Those practicing magick have used it extensively through the centuries, but its true origins and purpose have been lost in the mists of time.

No library of the contemporary occult student or practicing magician is complete without this tome. It remains a standard of esoteric lore by which others are measured. This edition includes a new foreword by noted esoteric scholar Joseph Peterson.

S. L. MacGregor Mathers (1854-1918) was a prominent scholar and key leader of the occult revival of the Western Mystery Tradition in the late 1800s. He held high office in the esoteric fraternal order of Rosicrucians and with other luminaries of his time and founded the Hermetic Order of the Golden Dawn. Mathers was a prolific editor and author.

Joseph Peterson has been studying and translating religious and esoteric texts for decades. He has a degree in Chemical Engineering from the University of Minnesota, where he also studied various languages and religions. He lives near Rochester, Minnesota.