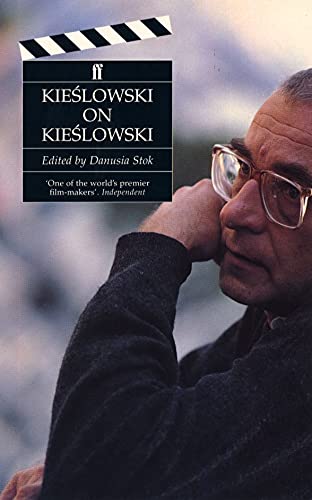 Light rubbing wear to cover, spine and page edges. Very minimal writing or notations in margins not affecting the text. Possible clean ex-library copy, with their stickers and or stamp(s). Bookseller Inventory # 3319948574

Synopsis: Krzystof Kieslowski untimely death in 1996 robbed cinema of one of its great visionaries. Decalogue, The Double Life of Veronique and the Three Colours trilogy earned Kieslowski his reputation as a world-class film-maker. He was notoriously reticent, and even dismissive of his work and talent, but these frank and detailed discussions showed a passion for film-making that animated a life disrupted by both Hilter and Stalin and the legacy these figures left in Eastern Europe. His struggle to work as a film-maker mirrors the struggle of Poland to reassert its identity. In 1989, when the Berlin Wall collapsed and Eastern European states overthrew the oppressive Soviet burden, his orientation gravitated towards France. Moving between Poland and France, Kieslowski created some of the most important cinematic works of the Nineties.

About the Author: The great Polish film director Krzysztof Kieslowski (1941-96) graduated from Lodz Film Academy in 1969. His best known films including Red, White, and Blue. Red brought him an Academy Award nomination for Best Director in 1995, White earned the Best Director Prize in Berlin in 1994, and Blue shared the Golden Lion at Venice in 1993.

Book Description Faber & Faber, 1995. Paperback. Condition: Good. Connecting readers with great books since 1972. Used books may not include companion materials, some shelf wear, may contain highlighting/notes, may not include cdrom or access codes. Customer service is our top priority!. Seller Inventory # S_299330606

Book Description Faber and Faber, 1994. Paperback. Condition: Good. Light foxing to page edges Good condition is defined as: a copy that has been read but remains in clean condition. All of the pages are intact and the cover is intact and the spine may show signs of wear. The book may have minor markings which are not specifically mentioned. Most items will be dispatched the same or the next working day. Seller Inventory # wbb0016114414

Book Description Paperback. Condition: Very Good. The book has been read, but is in excellent condition. Pages are intact and not marred by notes or highlighting. The spine remains undamaged. Seller Inventory # GOR001518943

Book Description Danusia Stok, 1994. Paperback. Condition: GOOD. Has little wear to the cover and pages. Contains some markings such as highlighting and writing. Seller Inventory # 0571173284_abe_gd

Book Description Danusia Stok, 1994. Condition: Good. A+ Customer service! Satisfaction Guaranteed! Book is in Used-Good condition. Pages and cover are clean and intact. Used items may not include supplementary materials such as CDs or access codes. May show signs of minor shelf wear and contain limited notes and highlighting. Seller Inventory # 0571173284-2-4