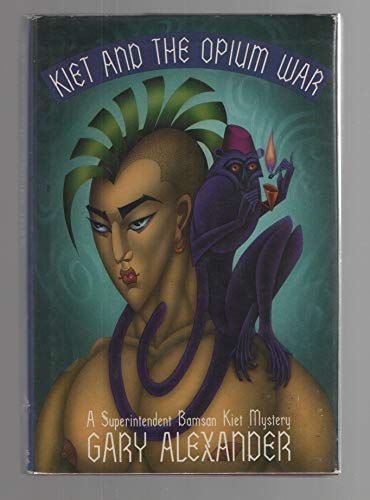 Kiet and the Opium War

Synopsis: Bamsan Kiet, chief of police in the capital city of Luong, a mythical Asian country that exists placidly among its violent Indochinese neighbors, is troubled by a flourishing opium trade, gangster-style rubouts, and friction from his soon-to-be inlaws

From Publishers Weekly: Luongian Police Chief Bamsan Kiet ( Kiet and the Golden Peacock) is back to outsmart the agents of evil in this witty police caper. Alexander's fictional Southeast Asian nation is beset by an opium war that provides both gangsters and insurgents with big money. Initially resigned to the flow of Golden Triangle opium through Luong, Kiet and his high-energy partner, Captain Binh, start taking things seriously after their investigation of a gangland-style murder turns up heroin. Kiet is already sad to see sections of Luong's capital, Hickorn, surrendering to Western-style bars and strip joints, and he is all the more anxious to keep out heroin labs. At the top of the list of suspects most likely to be running such labs, Kiet puts a Mafia hoodlum from Ohio, a Cuban agricultural adviser and Luong's air force minister. But even after the kidnapping of one and the murder of another narrows the field, Kiet still must prove that a heroin workshop exists. The resolution is rather neat, and not exactly suspenseful. But the always amusing mix of Eastern and Western trappings, and the believable interplay of plausible characters, make for enjoyable reading.
Copyright 1990 Reed Business Information, Inc.

1. Kiet and the Opium War

2. Kiet and the Opium War

3. Kiet and the Opium War

Book Description St. Martin's Press. Hardcover. Condition: Good. A copy that has been read, but remains in clean condition. All pages are intact, and the cover is intact. The spine may show signs of wear. Pages can include limited notes and highlighting, and the copy can include previous owner inscriptions. At ThriftBooks, our motto is: Read More, Spend Less. Seller Inventory # G0312051069I3N00

4. Kiet and the Opium War

Book Description St. Martin's Press. Hardcover. Condition: Fair. A readable copy. All pages are intact, and the cover is intact. Pages can include considerable notes-in pen or highlighter-but the notes cannot obscure the text. An ex-library book and may have standard library stamps and/or stickers. At ThriftBooks, our motto is: Read More, Spend Less. Seller Inventory # G0312051069I5N10

5. Kiet and the Opium War

6. Kiet and the Opium War

8. Kiet and the Opium War

9. Kiet and the Opium War: A Superintendent Bamsan Mystery