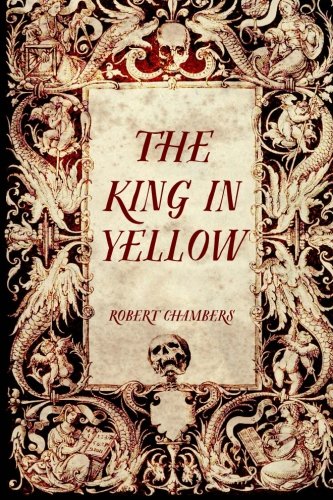 The King in Yellow

Synopsis: The King in Yellow is a collection of short stories involving the occult and supernatural. 4 of the 10 stories are about a mysterious play called "The King in Yellow" that makes people lose their minds. Chambers' work is considered a supernatural classic that influenced the later works of renowned horrorcore writer H.P. Lovecraft.

From the Publisher: From the Editor's Introduction:

To the extent that Robert W. Chambers (1865-1933) is remembered at all today, it is for "The King in Yellow", an odd collection of supernatural and "French" stories first published in 1895. It was followed by a few science-fiction comedies which are still reprinted from time to time, and then by dozens of popular historical romances and "society" novels, now long out of print and apparently unlamented. That he was originally an artist and friend of the famous Charles Dana Gibson is now mostly forgotten; knowing this, the reader can guess that Chambers was an art student in the Latin Quarter and attended the schools mentioned in his stories.

For his weird tales, Chambers took some names from Ambrose Bierce, and his own stories were later mined by H. P. Lovecraft and the pulp magazine writers of his circle. Such usage has kept "The King in Yellow", if not alive, then at least in the awareness of readers of the fantasy and horror genre. For all I know, the references have now spread to board games, rock music albums and cult television programs.

Like other readers of such literature, when I was young I enjoyed the supernatural stories in the first half of the book, but tended to skip over the tales of the artists' life in Paris in the second half. Indeed, several editions have omitted these stories entirely, substituting others more likely to appeal to the fantasy reader. However, as I grow older, the French stories appeal to me more and more. I am grateful for even a small glimpse into the author's youth in another time and place, now long gone. As an aside: the characters of these stories first appeared in Chambers' first book, "In the Quarter", which appeared in 1894.

What is "The King in Yellow" about? ("There are so many things which are impossible to explain"). The title refers to a book within our book, actually to a play in two acts, and to a supernatural character within that play who we suspect also exists outside of it. We know very little of the contents of the play, but discover that it drives the reader insane and damns his soul. Yet the book is said to be beautiful, expressing the "supreme note of art". As such, the device is a perfect one for the Decadent time in which it was created, suggesting the flowers of evil, the admixture of life and decay, beauty and malevolence.

As we move into the French stories, the supernatural elements fade away. We still have the themes of the danger of too much knowledge, and of innocence threatened and protected. The stories are loosely connected but not presented in any sort of chronological order. In fact, the first, "The Repairer of Reputations", is set in the future of 1920, and one of the later stories, "The Street of the First Shell", is a realistic account of the siege of Paris in 1870. Did Chambers have a reason for arranging the book in this way? Perhaps he wanted to introduce some distance from the locus of horror, showing how evil ripples out from a center, never entirely vanishing, but diminishing and being conquered by love. As dark as his vision may be, hope and love are never absent.

A reader is allowed his favorites. I have two: "The Mask" features a striking combination of hope and the intimation of transcendence, set against the sinister background of Chambers' mythology. It is the most Catholic of his stories, a strain that runs through many of them. And, at six pages, "The Street of the Four Winds" is one of the most perfect short stories I know.

1. The King in Yellow