Items related to Kiss; A Novel of the 87th Precinct 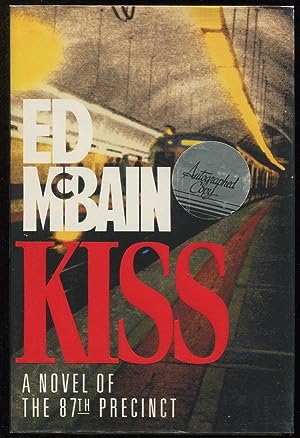 Kiss; A Novel of the 87th Precinct

AbeBooks Seller Since May 9, 2012 Seller Rating

8vo. [10], 11-351, [1] pp. Quarter red cloth over light yellow paper boards with gold lettering on the spine. Price of $17.00 on front flap of jacket. Signed by author on half-title page. A Very Good + book with minor shelfwear and a spot of discoloration on the bottom textblock in a very near Fine dust jacket. Bookseller Inventory # 00001410

Title: Kiss; A Novel of the 87th Precinct

Detective Steve Carella must protect a wealthy blonde beauty who has experienced two attempts on her life. By the author of Vespers and Widows. 100,000 first printing. $100,000 ad/promo. Tour.


We guarantee the condition of every book as it's described on the Abebooks web sites. If you're dissatisfied with your purchase (Incorrect Book/Not as Described/Damaged) or if the order hasn't arrived, you're eligible for a refund within 30 days of the estimated delivery date. If you've changed your mind about a book that you've ordered, it may be returned for a full refund (less shipping costs) so long as we are notified of the return within 7 calendar days of delivery.

We may be contacted by m...