Home Joe Bobker I Didn't Know That: Torah News U Can Use 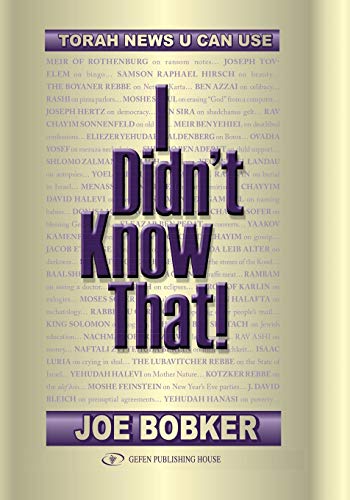 I Didn't Know That: Torah News U Can Use

Synopsis: Join Joe Bobker in his humorous adventure through Torah and Talmud, history and halacha, law and lore, and much more. This enjoyable volume on Jewish practice and law serves, in the author s words, as an envelope to be opened from time to time in order to learn something new. Packed with nuggets of information, this pithy tome is a lighthearted introduction to the serious business of being Jewish.

About the Author: JOE BOBKER was born in 1947 in Ulm, a displaced persons camp in Germany, to Polish Holocaust survivors Chaskel, of blessed memory, and Ida Bobker. On May 21, 1949, the family arrived in Sydney, Australia, as Holocaust refugees. Joe Bobker received his early Jewisheducation in an after-school cheder witha handful of other boys from Holocaust homes. His teachers, Rav Hertz and Rav Barzel, werefl own in especially from B'nei Brak to teach Torah tothe handful of children of survivors. Joe s main mentor was HaRav Osher Abramson, of blessed memory, also a Holocaust survivor. After graduating from the University of New South Wales, Joe Bobker pursued his Judaic studies at the famed Mercaz HaRav Kook Yeshivain Kiryat Moshe, Jerusalem. Over the years he has spoken frequently and written hundreds of articles about Jews and Judaism for a variety of newspapers including the 100-year-old Los Angeles Jewish Times, of which he is Publisher and Editor-in-Chief. His work covers a wide variety of Jewish subjects from a very personal, philosophical and often whimsical perspective. Since 1980, he has lived in Los Angeles and New York with his wife Miriam, a barrister from Melbourne and herself a child of Holocaust survivors, Baruch, of blessed memory, and Rivka Cohn. When asked whatacts as his inspiration, Joe replied, Eli, Avi, Benny, Dovi, Hadassa, Baylie, Layella, Devorah, Dalia, Toby, Chesky, Yoni, Baruch, Ze evi, Mattie, Mordechai, Henny, Dovid, Shira and Osher my sons, daughters-in-law, granddaughters and grandsons [as of Chanukah, 2006].

Book Description -. Hardcover. Condition: Very Good. I Didn't Know That: Torah News U Can Use This book is in very good condition and will be shipped within 24 hours of ordering. The cover may have some limited signs of wear but the pages are clean, intact and the spine remains undamaged. This book has clearly been well maintained and looked after thus far. Money back guarantee if you are not satisfied. See all our books here, order more than 1 book and get discounted shipping. Seller Inventory # 7719-9789652293985

Book Description Gefen Publishing House, 2007. Condition: Good. Shows some signs of wear, and may have some markings on the inside. Seller Inventory # GRP116856066

Book Description Gefen Publishing House, 2007. Condition: Good. A+ Customer service! Satisfaction Guaranteed! Book is in Used-Good condition. Pages and cover are clean and intact. Used items may not include supplementary materials such as CDs or access codes. May show signs of minor shelf wear and contain limited notes and highlighting. Seller Inventory # 9652293989-2-4