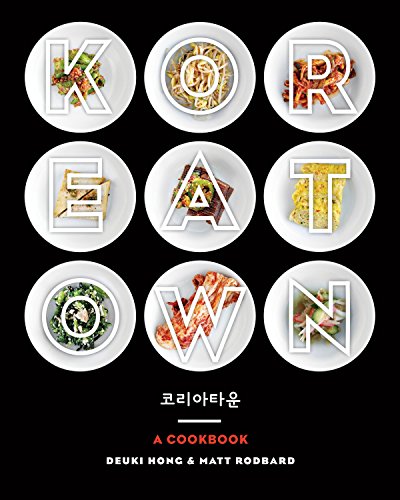 Synopsis: A New York Times bestseller and one of the most praised Korean cookbooks of all time, you'll explore the foods and flavors of Koreatowns across America through this collection of 100 recipes.

This is not your average "journey to Asia" cookbook. Koreatown is a spicy, funky, flavor-packed love affair with the grit and charm of Korean cooking in America. Koreatowns around the country are synonymous with mealtime feasts and late-night chef hangouts, and Deuki Hong and Matt Rodbard show us why through stories, interviews, and over 100 delicious, super-approachable recipes.

It's spicy, it's fermented, it's sweet and savory and loaded with umami: Korean cuisine is poised to break out in the U.S., but until now, the cookbooks have been focused on taking readers on an idealized Korean journey. Koreatown, though, is all about what's real and happening right here: the foods of Korean American communities all over our country, from L.A. to New York City, from Atlanta to Chicago. We follow Rodbard and Hong through those communities with stories and recipes for everything from beloved Korean barbecue favorites like bulgogi and kalbi to the lesser-known but deeply satisfying stews, soups, noodles, salads, drinks, and the many kimchis of the Korean American table.

About the Author: Deuki Hong is chef of the smash-hit Korean barbecue restaurant Kang Ho Dong Baekjeong in Manhattan’s Koreatown. He began his cooking career at 15 as a line cook under Aarón Sanchez at Centrico before heading to the Culinary Institute Of America. After graduating near the top of his class, he cooked under David Chang at Momofuku Noodle Bar before spending two years on the line at Jean-Georges. He's recently been recognized as an Eater Young Gun and named to the Zagat 30 Under 30 list.

Book Description Clarkson Potter, 2016. Condition: Good. A+ Customer service! Satisfaction Guaranteed! Book is in Used-Good condition. Pages and cover are clean and intact. Used items may not include supplementary materials such as CDs or access codes. May show signs of minor shelf wear and contain limited notes and highlighting. Seller Inventory # 0804186138-2-4