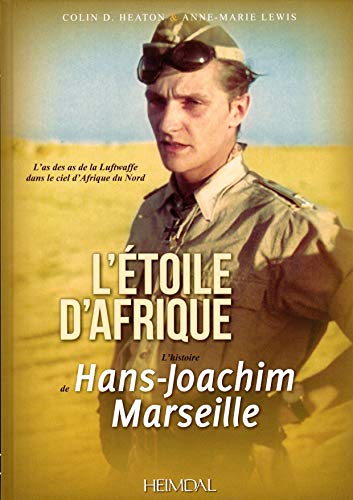 With 158 victories to his record and his death in the sky of Egypt on 30 September 1942, at only 22 years old, Hans-Joachim Marseille is a legend of aviation of World War II. In addition to his exceptional qualities as a fighter pilot, he is known for his nonconformism and his aversion to authority, which caused him much trouble with his hierarchy; as well as his chivalrous attitude that led him, repeatedly, to escort a wounded enemy or one whose aircraft was damaged to his base. This behavior and his efficiency in combat made him as famous in Germany as among allied pilots, who both feared and respected him. With testimonies from veterans who have experienced Marseille, American authors Colin D. Heaton and Anne-Marie Lewis wrote a very documented biography that traces the details of the short but intense life of an Aviator like no other who entered the Pantheon of fighter pilots at only 22 years old.

Anxious to develop their sector dedicated to World War II aviation, editions Heimdal publish this bestseller, overseas and in Britain, a French version in large cloth binding, under cover, to highlight a more enriched iconography of 150 photos in color and black and white, as well as profiles of aircraft. Certainly, a book that will date in the history of the aeronautical publications, by the importance of its subject as in the quality of its text and the richness of its illustration.

Heaton served in the U.S. Army and later in the Marine Corps as a scout sniper. He is the author of several titles and has taught history at American Military University. He currently lives in Southport, North Carolina.