Items related to THE LAST DETECTIVE 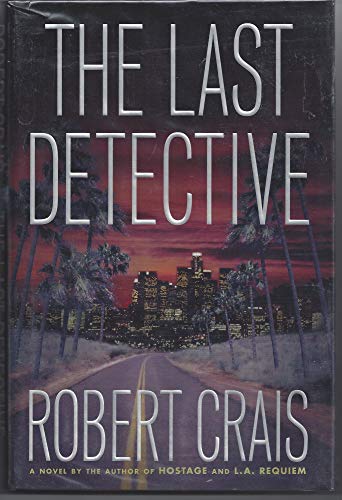 Elvis Cole is back...

With his acclaimed bestsellers, Hostage (a New York Times Notable Book) and Demolition Angel, Robert Crais drew raves for his unstoppable pacing, edgy characterizations, and cinematic prose. Now, in The Last Detective, Crais returns to his signature character, Los Angeles private investigator Elvis Cole, in a masterful page-turner that probes the meaning of family and the burdens of the past.

Elvis Cole's relationship with attorney Lucy Chenier is strained. When she moved from Louisiana to join Elvis in Los Angeles, she never dreamed that violence would so easily touch her life -- but then the unthinkable happens. While Lucy is away on business and her ten-year-old son, Ben, is staying with Elvis, Ben disappears without a trace. Desperate to believe that the boy has run away, evidence soon mounts to suggest a much darker scenario.

Joining forces with his enigmatic partner, Joe Pike, Elvis frantically searches for Ben with the help of LAPD Detective Carol Starkey, as Lucy's wealthy, oil-industry ex-husband attempts to wrest control of the investigation. Amid the maelstrom of personal conflicts, Elvis and Joe are forced to consider a more troubling lead -- one indicating that Ben's disappearance is connected to a terrible, long-held secret from Elvis Cole's past.

Venturing deep inside a complex psyche, Crais explores Elvis's need for family - the military that embraced him during a troubled adolescence, his rock-solid partnership with Pike, and his floundering relationship with Lucy - as they race the clock in their search for Ben. The Last Detective is Robert Crais' richest, most intense tale of suspense yet.

Don't start reading The Last Detective with much on your calendar. This tense, satisfying thriller will glue you to your chair, as private eye Elvis Cole--the star of eight previous Robert Crais novels, prior to the Cole-less Demolition Angel and Hostage--faces his toughest case: the abduction of his girlfriend's son, 10-year-old Ben Chenier, who was staying with Elvis when he was snatched.

Panic at Ben's disappearance turns to terror when the kidnapper phones to reveal his apparent motive, a dark secret from Elvis's past. But the plot thickens and twists, and then twists again, as Elvis and his longtime buddy, tough guy Joe Pike, race the clock against a group of villains as sinister as they are capable. The author mixes Elvis's first-person narration with third-person sections that describe other points of view--a risky technique, but Crais makes it work. He also does a fine job resurrecting the wisecracking Elvis of earlier books while imbuing him with a new depth and darkness.

This dazzlingly plotted, crisply told story is threaded with real detection (what a rarity!) and peopled by characters you can't help but care about--including Carol Starkey, the haunted bomb-squad cop from Demolition Angel, who's now a juvenile-abduction detective. Crais has long been getting better with each book, and The Last Detective continues the pattern. --Nicholas H. Allison