Items related to THE LAST KNOWN RESIDENCE OF MICKEY ACUNA 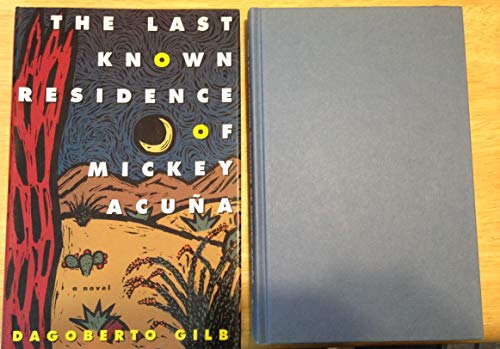 The first novel by a PEN Award-winning writer tells of a Southwestern man who moves into a YMCA to await a check, becomes the center of attention for the indigent, lonely residents, and is involved in a shocking event.

Mickey Acuna is a man suspended between a vague past and a vaguer future. Emerging from the landscape of the Southwest, buffeted by life and licking his wounds, he moves into a YMCA to wait for a check that is coming to save him and that demands an address. As days and then weeks pass without its arrival, he picks up work - first odd jobs and then shifts at the cash register of the Y - and hangs out with his neighbors, playing handball, drinking coffee, shooting pool, getting drunk, falling in love or lust with women he meets, works with, passes on the street. In the vacuum of the Y, Mickey finds himself becoming the unwitting center of a community starved for human contact and for meaning: Sarge, with his fast-food coupons; Omar, with his drunken rages and obsession with the vanished Lucy; Rosemary, whose abundant physical presence both attracts and repels him. Gilb captures the rhythms of the Y's residents - desolate, resigned, needing love - going about their confined lives. And Mickey, who is detached, who is both suspect and suspicious himself, not quite one of them, fights to maintain his distance and his freedom, until the narrative converges abruptly around him in a profound and shocking conclusion.