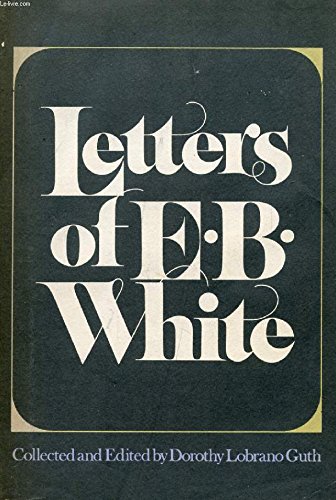 LETTERS OF E. B. WHITE

Signed by author E. B. White in black fountain ink on publisher's tipped-in page following ffep. Kroch's and Brentano's "First Edition Circle" bookmark laid in. For more than fifty years, E.B. White was a contributor to The New Yorker magazine. He was also a co-author of the English language style guide THE ELEMENTS OF STYLE, which is commonly known as Strunk & White. In addition, he wrote books for children, including STUART LITTLE (c. 1945), CHARLOTTE'S WEB (c. 1952), and THE TRUMPET OF THE SWAN (c. 1970). In a 2012 survey of School Library Journal readers, CHARLOTTE'S WEB was voted the top children's novel. Very fine, unread, first edition, first printing, in fine, mylar-protected dust jacket. This is the collector's copy you want. *Packed carefully and shipped in a box to insure arrival in pristine condition. {Not remainder-marked or price-clipped} BUND. Bookseller Inventory # 023343

E. B. White, the author of such beloved classics as Charlotte's Web, Stuart Little, and The Trumpet of the Swan, was born in Mount Vernon, New York. He graduated from Cornell University in 1921 and, five or six years later, joined the staff of The New Yorker magazine, then in its infancy. He died on October 1, 1985, and was survived by his son and three grandchildren.

Mr. White's essays have appeared in Harper's magazine, and some of his other books are: One Man's Meat, The Second Tree from the Corner, Letters of E. B. White, Essays of E. B. White, and Poems and Sketches of E. B. White. He won countless awards, including the 1971 National Medal for Literature and the Laura Ingalls Wilder Award, which commended him for making a "substantial and lasting contribution to literature for children."

During his lifetime, many young readers asked Mr. White if his stories were true. In a letter written to be sent to his fans, he answered, "No, they are imaginary tales . . . But real life is only one kind of life—there is also the life of the imagination."