Items related to THE LIFE OF NELSON A. ROCKEFELLER 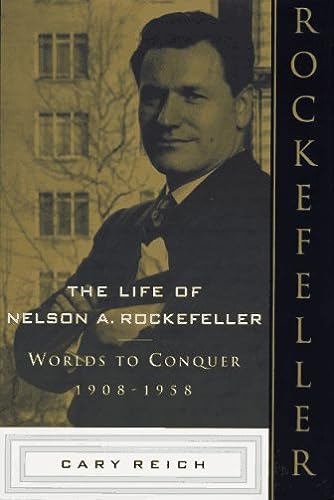 THE LIFE OF NELSON A. ROCKEFELLER

Finalist for the 1997 National Book Award in Biography. Mint, unread, first edition, first printing, in as new, mylar-protected dust jacket. 875 pp, with Index. *Please note that this heavy book will be carefully packed and shipped in a box to insure arrival in pristine condition. This is an never-circulated copy and you will not find a better one. A96. Bookseller Inventory # 022417

Title: THE LIFE OF NELSON A. ROCKEFELLER

A triumph of the biographer's art, The Life of Nelson A. Rockefeller is the first full-length biography of one of the most powerful, magnetic, fascinating figures on the twentieth-century stage.

Of all the great American dynastic families, few could match the combined wealth, power, and influence of the Rockefellers. And of all the Rockefellers, none was more determined to use these advantages than Nelson A. Rockefeller.

Nelson was never content to live off the fame and fortune due him as a Rockefeller. His imperious grandfather, John D. Rockefeller, and intimidating father, John Jr., set standards and boundaries that Nelson blithely ignored. He pushed for position within the family, and then broke a family taboo by taking his ambition to the forbidden world of politics. A devoted family man, he took many lovers with an almost casual sense of droit du seigneur. He surrounded himself with brilliant, devoted subordinates; he flattered and cajoled more powerful people who would also end up serving his needs.

Handsome, ferociously energetic, charming, and ruthless, Rockefeller had a rapacious appetite for life--and for power--that showed itself in the stunning breadth of his activities and in the daring of his ideas. Nelson's sunny, optimistic demeanor masked a Machiavellian mind. At a young age he wrested control of the Rockefeller Center project from his father's minions, turned the Museum of Modern Art into a world-class institution, used a midlevel bureaucratic position during World War II to run the affairs of an entire continent; through pure ego and drive he bent the United Nations conference to his will and redirected the path of history. Nelson A. Rockefeller's fierce drive to achieve would have a profound effect on a city, a state, a nation, and the world.

Cary Reich's masterful biography, eight years in the making, brings this awesome figure to life. Reich enjoyed unprecedented access to the Rockefeller family archives, scrutinized FBI and FOIA files, and interviewed over three hundred individuals for the book, including many who had never spoken about Rockefeller for the record. This two-volume work (the second to appear in 1997) will surely stand alongside the works of Robert Caro, Doris Kearns Goodwin, and David McCullough.

Cary Reich is the author of Financier: The Biography of AndrÚ Meyer. He is the former executive editor of Institutional Investor and has written numerous portraits of the powerful and the wealthy. He is the recipient of numerous journalism awards, including the Overseas Press Award, the Deadline Club Award, and the John Hancock Award for Excellence in Business and Financial Journalism. He lives in New York City.

Proving that the rich are indeed different from you and me, Cary Reich informs us that former New York Governor Nelson Rockefeller's father, John D. Rockefeller Jr., made his children swat flies to earn their allowances, and take long single-file marches with him each Sunday. This account of Rockefeller's seemingly charmed life takes us from his boyhood on the family's estate at Tarrytown, New York to his landslide victory over Averell Harriman in the 1958 governor's race in New York. At that point Rockefeller seemed poised for the presidency--a goal that eluded him for the rest of his life.