Items related to LINCOLN: A Novel 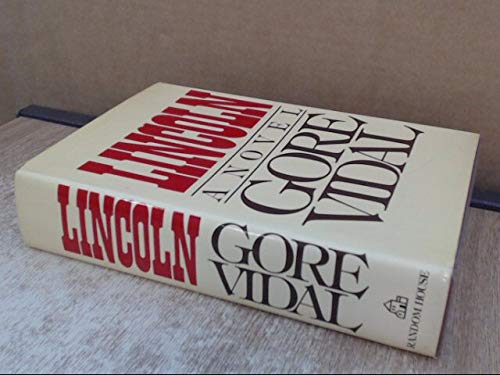 Fine, unread copy in brown cloth boards, in very good, mylar-protected dust jacket. (Jacket has flap creases, a snag with minor paper loss at spine head, and a clean, one-inch edge tear at bottom rear. These flaws have been left as is, and the jacket (not price-clipped or sun-faded) presents very well in mylar despite them. The book is tight and very clean.) L129. Bookseller Inventory # 021640

Lincoln is the cornerstone of Gore Vidal's fictional American chronicle, which includes Burr, 1876, Washington, D.C., Empire, and Hollywood. It opens early on a frozen winter morning in 1861, when President-elect Abraham Lincoln slips into Washington, flanked by two bodyguards. The future president is in disguise, for there is talk of a plot to murder him. During the next four years there will be numerous plots to murder this man who has sworn to unite a disintegrating nation. Isolated in a ramshackle White House in the center of a proslavery city, Lincoln presides over a fragmenting government as Lee's armies beat at the gates. In this profoundly moving novel, a work of epic proportions and intense human sympathy, Lincoln is observed by his loved ones and his rivals. The cast of characters is almost Dickensian: politicians, generals, White House aides, newspapermen, Northern and Southern conspirators, amiably evil bankers, and a wife slowly going mad. Vidal's portrait of the president is at once intimate
and monumental, stark and complex, drawn with the wit, grace, and authority of one of the great historical novelists.
With a new Introduction by the author.

Lincoln is a masterwork of historical fiction, in which Gore Vidal combines a comprehensive knowledge of Civil War America with 20th-century literary technique, probing the minds and motives of the men surrounding Abraham Lincoln, including personal secretary John Hay and scheming cabinet members William Seward and Salmon P. Chase, as well as his wife, Mary Todd. It is a book monumental in scope that never loses sight of the intimate and personal in its depiction of the power struggles that accompanied Lincoln's efforts to preserve the Union at all costs--efforts in which the eradication of slavery was far from the president's main objective. As usual, there's plenty of room for Vidal's wickedly humorous deflation of American icons, including a comic interlude in a Washington bordello in which Lincoln's former law partner informs Hay that Lincoln had contracted syphilis as a young man and had, just before marrying Mary Todd, suffered what can only be described as a nervous breakdown. (Protestors should note that Vidal is only passing along what that former partner had written in his own biography of Lincoln.) Don't be intimidated by the size of Lincoln; if you like historical fiction, you should read this book at the first opportunity. --Ron Hogan