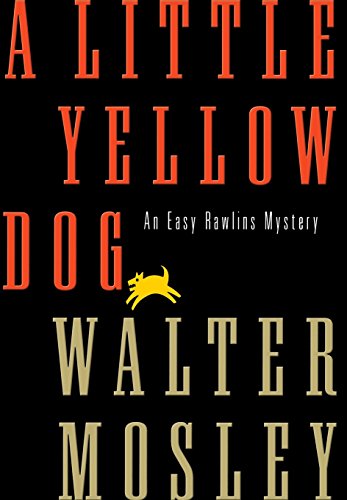 Signed beautifully by author on title page with a black sharpiek. t's 1964, and Easy Rawlins has given up street life, and has a job as a high school janitor. One morning, Easy is seduced by a teacher with a dog. By evening, the teacher is gone, leaving Easy with her dog, and a corpse. A murderer is running loose and a little yellow dog is plotting revenge. A LITTLE YELLOW DOG the fifth book in the Easy Rawlins serie. Mosley is the winner of the 2016 Grand Master Award from the Mystery Writers of America. New, mint, unread, first edition, first printing, in new, mylar-protected dust jacket. {Not remainder-marked or price-clipped} M90. Bookseller Inventory # 4381

The eagerly awaited new easy Rawlins novel by Walter Mosley--the most acclaimed mystery writer of the nineties and a major presence in American literature.

With each succeeding mystery featuring his reluctant detective (and natural-born existentialist) Easy Rawlins, Walter Mosley gains new fans and builds on what is now recognized as a permanent addition to American crime writing. His current book is A Little Yellow Dog--another instant classic of suspense, style, and shrewd social observation.

It's 1964. Easy Rawlins has given up the street life that has brought him so much trouble and grief. He's taken on a job as supervising custodian of Sojourner Truth Junior High School in Watts. For two years he's been getting up early and going off to work. He wears nice clothes and puts all his energy-and love-into his job and his adopted children. Easy likes his new life, even though he feels empty and a little bored sometimes. But all that is about to change.

Easy comes in early one morning to find one of the teachers already in her classroom. She has a dog with her and a story about a husband gone mad. Before Easy knows what's happening, the teacher is in his arms. Before the day is over the teacher is gone, leaving Easy with her dog, and the handsomest corpse Easy has ever seen is found in the school garden. That night a second corpse turns up.

Easy may have left the streets but he hasn't been forgotten. The world is changing faster than he can keep up. The police believe that Easy is involved in the murders. Old enemies are waiting to get even. The principal of the school wants to fire him. His old friends aren't the same and his new friends might be his death. Easy wants back into his careful little life, but that door is closed. A murderer is running loose somewhere. And a little yellow dog plots revenge.
Review:

The saga of Easy Rawlins that began in 1990 with Devil in a Blue Dress, continues in A Little Yellow Dog. Working as a janitor at Sojourner Truth Junior High School, Easy is asked to care for a small dog owned by the attractive Idabell Holland, a teacher at the school. When Idabell's husband is murdered, Easy finds himself mixed up with a gang of criminals engaged in looting Los Angeles schools and smuggling heroin from France. Idabell and Easy fall into a sexual liaison, but in the wake of it, Idabell is found stabbed to death in the passenger seat of Easy's car. While at first Easy thinks the murders are a "simple falling out of thieves," a surprising twist on the level of "The Maltese Falcon" reveals the truth.