Items related to THE LIVES OF THE MUSES: Nine Women & the Artists...

Home Prose, Francine THE LIVES OF THE MUSES: Nine Women & the Artists They Inspired
Stock Image 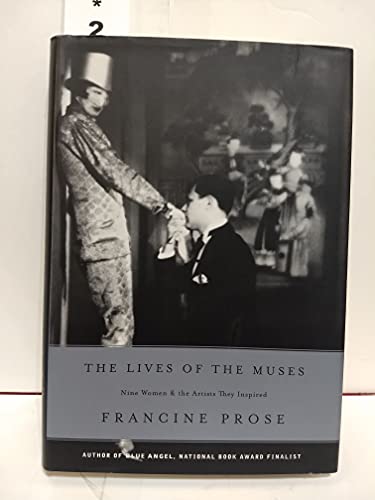 THE LIVES OF THE MUSES: Nine Women & the Artists They Inspired

In a brilliant, wry, and provocative new book, National Book Award finalist Francine Prose explores the complex relationship between the artist and his muse. In so doing, she illuminates with great sensitivity and intelligence the elusive emotional wellsprings of the creative process.

There is no ideal muse, but rather as many variations on the theme as there are individual women who have had the luck, or misfortune, to find their destiny conjoined with that of a particular artist. What are we to make of the relationship between the child Alice Liddell, who inspired Alice in Wonderland, and the Oxford don who became Lewis Carroll? Or the so-called serial muse, Lou Andreas-Salomé, who captivated Nietzsche, Rilke, and Freud—as impressive a list as any muse can boast? Salvador Dalí was the only artist to sign his art with his muse's name, and Gala Dalí certainly knew how to market her artist and his work while simultaneously burnishing her own image and celebrity.

Lou, Gala, and Yoko Ono all defy the feminist stereotype of the muse as a passive beauty put on a pedestal and oppressed by a male artist. However, it's rare to find an artist and muse who are genuine partners, true collaborators, such as ballerina Suzanne Farrell and choreographer George Balanchine.

What do the nine muses chosen by Francine Prose have in common? They were all beautiful, or sexy, or gifted with some more unconventional appeal. All loved, and were loved by, their artists, and inspired them with an intensity of emotion akin to Eros. For these artists, the love of—or for—their muses provided an essential element required for the melding of talent and technique necessary to create art.

In The Lives of the Muses, Francine Prose writes a spirited and enlightening exposé of nine women who fired the imaginations of some of the most inimitable artists and thinkers of the 19th and 20th centuries. With wicked wit, she shows how these women were both exemplars of their times and iconoclasts struggling to assert their own identity within the unconventional relationships they formed with these men. In doing so, she undertakes an examination of the concept of the muse in all its permutations--from the static nine Muses of classical Greek mythology, through Dante's oft-recycled Beatrice, to its ironized figuration in contemporary popular culture.

In addition to Alice Liddell, Prose looks at the following women: Hester Thrale, a long-suffering brewer's wife whose romantic friendship allowed the depressive Dr. Samuel Johnson to continue writing; the tormented Elizabeth Siddal, an opium-addicted artist who became Beatrice to Pre-Raphaelite painter and poet Dante Gabriel Rossetti; Lou Andreas-Salome, who captivated and aroused a triumvirate of original thinkers: Friedrich Nietzsche, Rainer Maria Rilke, and Sigmund Freud; the "imperious" Gala Dali, who continued to sleep with her ex-husband, poet Paul Eluard, even as she transformed herself into a phenomenal marketing machine for surrealist Salvador Dali; Lee Miller, a model who mastered the techniques of Man Ray and others, and became a talented photographer; Suzanne Farrell, a ballerina who incarnated, animated, and was inspired to great heights of artistry by the compositions of choreographer George Balanchine; Charis Weston, one in a long line of the erotically restless Edward Weston's cast-off art wives and lovers; and the infamous Yoko Ono, who fought fiercely for recognition as an avant-garde artist as she sought to subserve John Lennon into the role of muse.

Prose draws on photographs, diaries, correspondence, memoirs, and original works of art that reveal the complexity of these artist-muse relationships, and that direct her readers to other books should their curiosity be piqued (as it undoubtedly will). Author Prose has a talent for writing provocative, invigorating prose that engages and excites the reader, inspiring them to undertake wider reading. --Diana Kuprel, Amazon.ca