Items related to A LONG WAY FROM HOME: Growing Up in the American Heartland

Home Brokaw, Tom A LONG WAY FROM HOME: Growing Up in the American Heartland
Stock Image 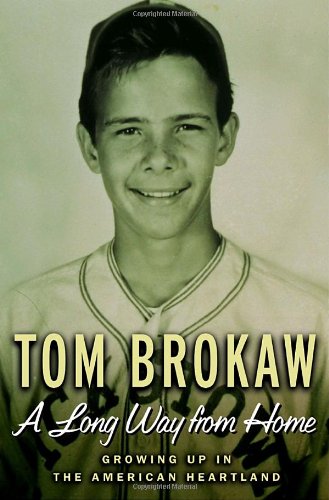 A LONG WAY FROM HOME: Growing Up in the American Heartland

Signed by author Tom Brokaw, on title page. Brokaw is the former anchor and managing editor of NBC Nightly News from 1982 to 2004. He is the author of THE GREATEST GENERATION (1998) and other books and the recipient of numerous awards and honors. He is the only person to host all three major NBC News programs: The Today Show, NBC Nightly News, and, briefly, Meet the Press. As new, first edition, first printing, in fine, mylar-protected dust jacket. {Not remainder-marked or price-clipped} BIOS1. Bookseller Inventory # 022434

Title: A LONG WAY FROM HOME: Growing Up in the ...

Reflections on America and the American experience as he has lived and observed it by the bestselling author of The Greatest Generation, whose iconic career in journalism has spanned more than fifty years

From his parents’ life in the Thirties, on to his boyhood along the Missouri River and on the prairies of South Dakota in the Forties, into his early journalism career in the Fifties and the tumultuous Sixties, up to the present, this personal story is a reflection on America in our time. Tom Brokaw writes about growing up and coming of age in the heartland, and of the family, the people, the culture and the values that shaped him then and still do today.

His father, Red Brokaw, a genius with machines, followed the instincts of Tom’s mother Jean, and took the risk of moving his small family from an Army base to Pickstown, South Dakota, where Red got a job as a heavy equipment operator in the Army Corps of Engineers’ project building the Ft. Randall dam along the Missouri River. Tom Brokaw describes how this move became the pivotal decision in their lives, as the Brokaw family, along with others after World War II, began to live out the American Dream: community, relative prosperity, middle class pleasures and good educations for their children.

“Along the river and in the surrounding hills, I had a Tom Sawyer boyhood,” Brokaw writes; and as he describes his own pilgrimage as it unfolded—from childhood to love, marriage, the early days in broadcast journalism, and beyond—he also reflects on what brought him and so many Americans of his generation to lead lives a long way from home, yet forever affected by it.

Praise for A Long Way from Home

“[A] love letter to the . . . people and places that enriched a ‘Tom Sawyer boyhood.’ Brokaw . . . has a knack for delivering quirky observations on small-town life. . . . Bottom line: Tom’s terrific.”—People

“Breezy and straightforward . . . much like the assertive TV newsman himself.”—Los Angeles Times

“Brokaw evokes a sense of community, a pride of citizenship, and a confidence in American ideals that will impress his readers.”—Richmond Times-Dispatch

In his earlier books, TV news anchor Tom Brokaw has leaned heavily on the experiences of others to remember and define what he calls "the Greatest Generation"--those who came of age during World War II and its aftermath. In A Long Way Home Brokaw turns inward to focus on his own experiences growing up in South Dakota, his early years a broadcaster working in a then-novel medium, and his still-deep connection to the Midwestern people, places, and values that shaped him. In this bluntly effective and homespun memoir, Brokaw argues that, no matter how far one may travel--say, to New York and through five decades of a successful broadcast journalism career--it's possible to remain a true creature of the heartlands. It's a message that is likely to resonate most emphatically with those of Brokaw's generation, though its basic premise can be applied more universally as well. --David Bombeck