Items related to THE LOOMING TOWER: Al-Qaeda and the Road to 9/11

Home Wright, Lawrence THE LOOMING TOWER: Al-Qaeda and the Road to 9/11
Stock Image 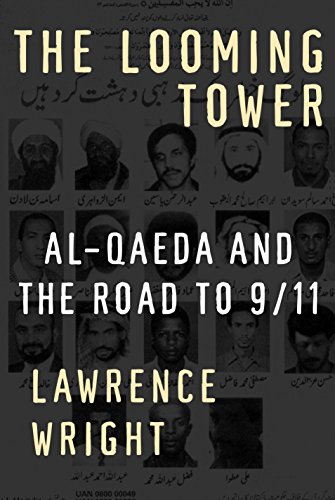 THE LOOMING TOWER: Al-Qaeda and the Road to 9/11

Signed by author on title page in black fountain ink. Winner of the 2007 Pulitzer Prize for Nonfiction for THE LOOMING TOWER (a landmark book chosen by Time magazine as one of the greatest nonfiction books of all time), Wright is most recently the author of GOING CLEAR: Scientology, Hollywood, and the Prison of Belief.(Basis of the new television series now st As new, in as new, myreaming on Hulu.) lar-protected dust jacket. BUND. Bookseller Inventory # 023244

Title: THE LOOMING TOWER: Al-Qaeda and the Road to ...

A sweeping narrative history of the events leading to 9/11, a groundbreaking look at the people and ideas, the terrorist plans and the Western intelligence failures that culminated in the assault on America. Lawrence Wright’s remarkable book is based on five years of research and hundreds of interviews that he conducted in Egypt, Saudi Arabia, Pakistan, Afghanistan, Sudan, England, France, Germany, Spain, and the United States.

The Looming Tower achieves an unprecedented level of intimacy and insight by telling the story through the interweaving lives of four men: the two leaders of al-Qaeda, Osama bin Laden and Ayman al-Zawahiri; the FBI’s counterterrorism chief, John O’Neill; and the former head of Saudi intelligence, Prince Turki al-Faisal.

As these lives unfold, we see revealed: the crosscurrents of modern Islam that helped to radicalize Zawahiri and bin Laden . . . the birth of al-Qaeda and its unsteady development into an organization capable of the American embassy bombings in Kenya and Tanzania and the attack on the USS Cole . . . O’Neill’s heroic efforts to track al-Qaeda before 9/11, and his tragic death in the World Trade towers . . . Prince Turki’s transformation from bin Laden’s ally to his enemy . . . the failures of the FBI, CIA, and NSA to share intelligence that might have prevented the 9/11 attacks.

The Looming Tower broadens and deepens our knowledge of these signal events by taking us behind the scenes. Here is Sayyid Qutb, founder of the modern Islamist movement, lonely and despairing as he meets Western culture up close in 1940s America; the privileged childhoods of bin Laden and Zawahiri; family life in the al-Qaeda compounds of Sudan and Afghanistan; O’Neill’s high-wire act in balancing his all-consuming career with his equally entangling personal life—he was living with three women, each of them unaware of the others’ existence—and the nitty-gritty of turf battles among U.S. intelligence agencies.

Brilliantly conceived and written, The Looming Tower draws all elements of the story into a galvanizing narrative that adds immeasurably to our understanding of how we arrived at September 11, 2001. The richness of its new information, and the depth of its perceptions, can help us deal more wisely and effectively with the continuing terrorist threat.

Lawrence Wright graduated from Tulane University and spent two years teaching at the American University in Cairo, Egypt. He is a staff writer for The New Yorker and a fellow at the Center on Law and Security at New York University School of Law. The author of five works of nonfiction—City Children, Country Summer; In the New World; Saints and Sinners; Remembering Satan; and Twins—he has also written a novel, God’s Favorite, and was cowriter of the movie The Siege. He and his wife are longtime residents of Austin, Texas.