Home Zane Grey The Last of the Plainsmen 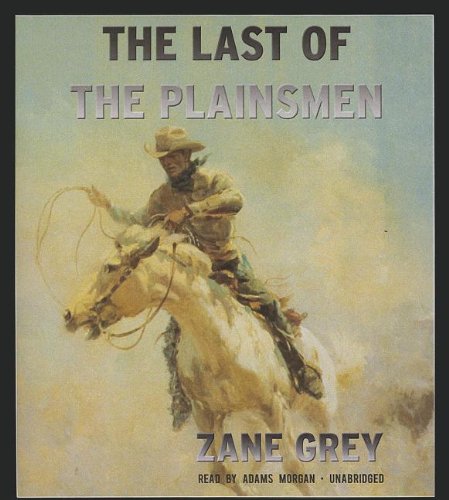 The Last of the Plainsmen

Synopsis: "Hezd rope the devil and tie him down...if the lasso didn't burn," it was said of "Buffalo Jones," one of the last of the famous plainsmen who trod the trails of the Old West. Killing was repulsive to him and the passion of his life was to capture wild beasts alive. When he saw that the extinction of the buffalo was inevitable, he labored for ten years pursuing, capturing and taming the noble beasts, for which the West gave him fame and the name Preserver of the American Bison. In this thrilling story of a hunting trip with Jones, Zane Grey speaks firsthand of the great man's courage and prowess; how he roped the ferocious cougar and took it, clawing and spitting, back to camp; how he nearly captured White King, the glorious leader of a herd of wild mustangs; and how the whole party made camp under the aurora borealis and hunted polar wolves. "I want to show the color and beauty of those painted cliffs and the long, brown-matted bluebell-dotted aisles in the grand forests; I want to give a suggestion of the tang of the dry, cool air; and particularly, I want to throw a little light upon the life and nature of that strange character and remarkable man, Buffalo Jones."--Zane Grey

Zane Grey (1872-1939), born in Ohio, was practicing dentistry in New York when he and his wife published his first novel. Grey presented the West as a moral battleground in which his characters are destroyed because of their inability to change or are redeemed through a final confrontation with their past. The man whose name is synonymous with Westerns made his first trip west in 1907 at age thirty-five. More than 130 films have been based on his work.

1. The Last of the Plainsmen

2. The Last of the Plainsmen -