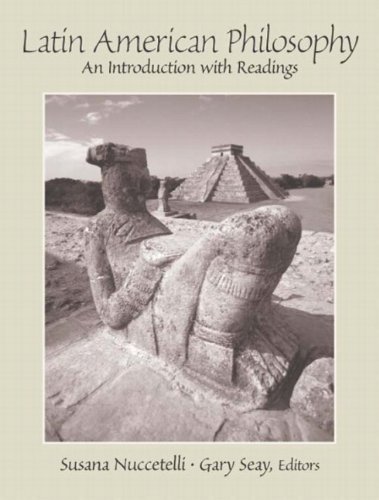 This book offers the reflections of Latin American thinkers on the nature of philosophy, justice, human rights, cultural identity, and other issues that have faced them from the colonial period to the present day. Most of the essays are short and easy to read—making them accessible to readers with little or no philosophical background. This book presents readers with philosophical ideas about present-day controversies such as poverty, racism, the equality of women, and the distribution of wealth. For anyone interested Latin American philosophy and the development of philosophy in Latin America.

Susana Nuccetelli and Gary Seay's text, Latin American Philosophy: An Introduction with Readings, makes original and translated writings of Latin American thinkers available on a variety of philosophical problems. These problems include the nature of philosophy, rationality, justice, human rights, cultural identity, and many other questions that have concerned them from the colonial period to the present day.

Features of Latin American Philosophy: An Introduction with Readings
"About this title" may belong to another edition of this title.

Book Description Prentice Hall, 2003. Paperback. Condition: Good. Item may show signs of shelf wear. Pages may include limited notes and highlighting. May include supplemental or companion materials if applicable. Access codes may or may not work. Connecting readers since 1972. Customer service is our top priority. Seller Inventory # mon0002178647

Book Description 2004. Condition: Good. Shows some signs of wear, and may have some markings on the inside. Seller Inventory # GRP13979496

Book Description Condition: Acceptable. May have some shelf-wear due to normal use. Seller Inventory # 0KVBKH009RDE

Book Description Pearson, 2003. Condition: Good. A+ Customer service! Satisfaction Guaranteed! Book is in Used-Good condition. Pages and cover are clean and intact. Used items may not include supplementary materials such as CDs or access codes. May show signs of minor shelf wear and contain limited notes and highlighting. Seller Inventory # 0130485160-2-4

Book Description Pearson, 2003. Paperback. Condition: GOOD. Has little wear to the cover and pages. Contains some markings such as highlighting and writing. Supplemental materials are not guaranteed with any used book purchases. Seller Inventory # 0130485160_abe_gd