Home Charles River Editors Legends of the Bible: The Life and Legacy of Pontius Pilate 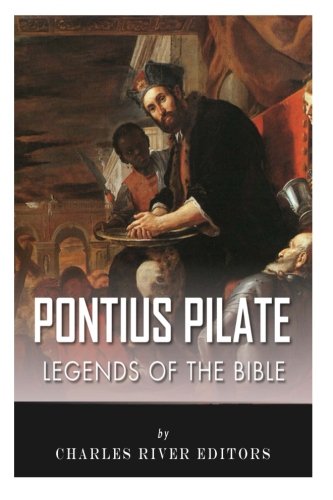 Legends of the Bible: The Life and Legacy of Pontius Pilate

Synopsis: *Discusses how Pilate may have become the prefect of Judaea
*Includes historical and Biblical accounts of Pilate's prefecture before the passion of Christ.
*Explains the different historical depictions of Pilate and his involvement in the trial and execution of Jesus.
*Includes pictures.
*Includes a Bibliography for further reading.
“I find no guilt in him.” – Pontius Pilate, according to the Gospel of John
A lot of ink has been spilled covering the lives of history’s most influential figures, but how much of the forest is lost for the trees? In Charles River Editors’ Legends of the Bible series, readers can get caught up to speed on the lives of the Bible’s most important men and women in the time it takes to finish a commute, while learning interesting facts long forgotten or never known.
The name Pontius Pilate is instantly familiar to anyone who has read the Bible or has heard of the passion of Christ, but the man himself has mostly eluded Biblical scholars and historians. As the Roman prefect in Judaea during Christ’s life and death, Pilate played a central role in the ultimate crucifixion of Jesus, but he is best remembered for literally washing his hands as a symbol that he did not consider the blood to be on his hands.
Aside from being in the middle of one of the Bible’s most important dramas, mystery surrounds Pilate, and as a result he has been portrayed in a number of different and contradictory ways. Pilate has been viewed as an ineffective and weak ruler by some, an iron-fisted ruler by others, and a completely oblivious one by still others. Other than being mentioned in the Gospels, a few other works in the non-canonical texts that comprise the apocrypha, and the works of a few ancient Roman historians, Pilate the figure has mostly been lost to history, even as his name has remained universally known.
Legends of the Bible: The Life and Legacy of Pontius Pilate discusses the facts, myths, and legends surrounding the life of Pilate, examining the Bible and historical record to piece together his life and legacy in an attempt to separate fact from fiction. Along with pictures and a bibliography, you will learn about Pontius Pilate like you never have before, in no time at all.

1. Legends of the Bible: The Life and Legacy of Pontius Pilate