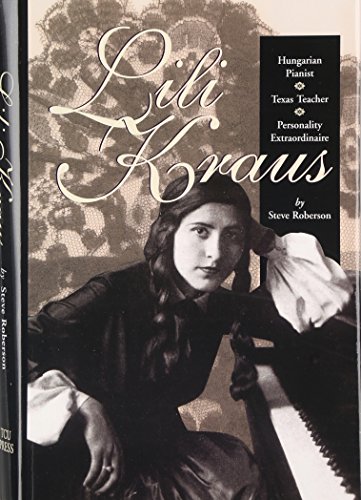 Synopsis: A talented pianist and a woman of great vitality and charm, Lili Kraus was one of the most extraordinary musicians of the twentieth century. Born into extreme poverty in Budapest, she showed such musical talent that by the age of seven she was admitted to the Royal Academy of Music as a piano major. Eventually she studied with Bartók and Schnabel, the great apostle of the Viennese classicists, and became one of the leading interpreters of the Mozart piano repertoire. Her long and distinguished performing career included appearances with the world’s major orchestras and more than one hundred recordings.

Kraus’ life was as fascinating as her music. As Nazism hovered over Germany, she and her husband, Otto Mandl, converted from Judaism to Catholicism and finally fled to the Dutch East Indies where they and their two children were interned by the Japanese in separate prisoner-of-war camps. Kraus turned that grim and bitter experience into an opportunity for personal and professional reflection and growth.

Charmingly charismatic, brilliant and beautiful, she spoke seven languages, designed her own gowns, and was on intimate terms with the rich and famous of the musical and political scenes of two continents. An intriguing world figure, she became an American by association when she moved to Texas to accept a position with TCU in Fort Worth. In her later years, she divided her time between Texas and her home in North Carolina.

This, the first full biography of the late Madame Kraus, is based on extensive interviews with Kraus, her associates throughout Europe and the United States, and her family. Roberson collected hundreds of recital and concert reviews, published or broadcast interviews with the diva, and a number of articles written by Kraus. The manuscript includes an exhaustive discography and an extensive bibliography.

The general reader will find here a portrait of an intriguing world figure. Musicians will value the explanations of her ideas on technique, interpretation, and performance. All will be impressed with the nobility and strength of her spirit.

About the Author: Steve Roberson studied with Lili Kraus at TCU from 1972 to 1975 and later conducted interviews with the pianist in 1984 and 1985. Roberson holds degrees in music from Wake Forest University and TCU and a Ph.D. from the University of Oklahoma. He is a widely published author on a variety of topics related to piano teaching. His articles have appeared in professional journals in the United States, Europe, and Australia. He has also lectured extensively on both sides of the Atlantic. Currently Roberson serves as professor and associate dean of the Jordan College of Fine Arts at Butler University in Indianapolis where he teaches piano and piano pedagogy.

Book Description Texas Christian University Press. Hardcover. Condition: As New. An apparently unread copy in perfect condition. Dust cover is intact; pages are clean and are not marred by notes or folds of any kind. At ThriftBooks, our motto is: Read More, Spend Less. Seller Inventory # G0875652166I2N00

Book Description Texas Christian University Press, 2000. Condition: Good. A+ Customer service! Satisfaction Guaranteed! Book is in Used-Good condition. Pages and cover are clean and intact. Used items may not include supplementary materials such as CDs or access codes. May show signs of minor shelf wear and contain limited notes and highlighting. Seller Inventory # 0875652166-2-4