Items related to The Lion and the Unicorn: Gladstone vs. Disraeli

Home Aldous, Richard The Lion and the Unicorn: Gladstone vs. Disraeli
Stock Image 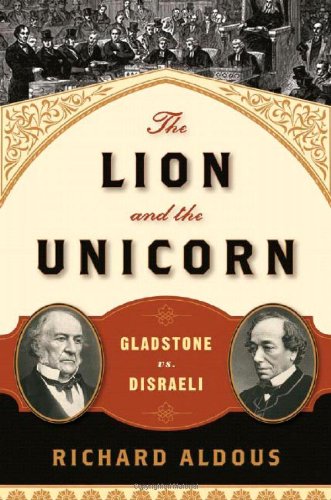 The Lion and the Unicorn: Gladstone vs. Disraeli

Quantity: 1
View all  copies of this book
Buy New
Price: US$ 31.13 Convert Currency
Shipping: US$ 4.00 Within U.S.A. Destination, rates & speeds
Add to basket

Title: The Lion and the Unicorn: Gladstone vs. ...

William Gladstone and Benjamin Disraeli were the fiercest political rivals of the nineteenth century. Their intense mutual hatred was both ideologically driven and deeply personal. Their vitriolic duels, carried out over decades, lend profound insight into the social and political currents that dominated Victorian England. To Disraeli―a legendary dandy descended from Sephardic Jews―his antagonist was an "unprincipled maniac" characterized by an "extraordinary mixture of envy, vindictiveness, hypocrisy, and superstition." For the conservative aristocrat Gladstone, his rival was "the Grand Corrupter," whose destruction he plotted "day and night, week by week, month by month." In the tradition of Roy Jenkins and A. N. Wilson, Richard Aldous has written an outstanding political biography, giving us the first dual portrait of this intense and momentous rivalry. Aldous's vivid narrative style―by turns powerful, witty, and stirring―brings new life to the Gladstone and Disraeli story and confirms a perennial truth: in politics, everything is personal. 16 pages of illustrations About the Author:

Richard Aldous is a professor of history at Bard College, where he holds the Eugene Meyer Chair. He is the author and editor of eleven books and is a contributor to television and radio on both sides of the Atlantic. Aldous’s writing appears regularly in the Wall Street Journal, the New York Times Book Review, and The American Interest, where he is a contributing editor. He lives in Red Hook, New York.

Proceeds from our book sales help support our farm and the growing of sustainable foods. Your purchase will not only get you a great book, but will help to keep small farmers alive. Thanks!


All books subject to prior sale. Books shipped via USPS Media Mail or Priority Mail. Extra postage required for heavy books and sets unless otherwise noted. Payment in U.S. dollars via VISA/MASTERCARD/DISCOVER. Sorry, we do not accept checks or money orders. Purchases may be returned within 30 days of receipt for refund; refund will be initiated upon receipt of returned book.