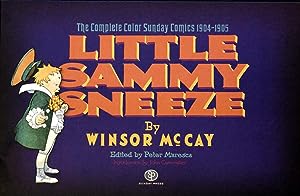 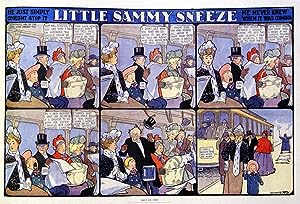 Quantity: 1
View all  copies of this book
Buy New
Price: US$ 68.56 Convert Currency
Shipping: US$ 48.41 From United Kingdom to U.S.A. Destination, rates & speeds
Add to basket

Sunday Press 2007. Full Colour illustrations. Before his magnificent Little Nemo, Winsor McCay created two unique Sunday comics also starring young children: Little Sammy Sneeze and Hungry Henrietta. Sunday Press Books, publisher of the award-winning Little Nemo- Splendid Sundays presents both of these historic and fascinating comic strips in one volume, featuring the complete color Sammy Sneeze (1904-1905) and the complete 27-episode run of Hungry Henrietta , all printed in their original size and colors. Most pages have never been reprinted! Little Sammy Sneeze presents a unique concept in classic comics reprints, where the back of each Sammy page features a strip that appeared on the back in the original Sunday comic section of the New York Herald. In 1905 that strip was Hungry Henrietta, but pages from 1904 showcase the unique Upside Downs by Gustav Verbeek, and the unknown nonsense masterpiece, The Woozlebeasts. Just like the earlier Little Nemo and Walt and Skeezix collections, these incredible Sunday pages have been digitally restored to their original colorful brilliance and are reproduced at full size. The book also includes many other early Winsor McCay strips and essays by Jeet Heer, Thierry Smolderen and Dan Nadel. 96 pages. Size: 16" x 10˝" (406mm x 266mm). ISBN: 9780976888543. Seller Inventory # LSS1904

Today, Winsor McCay (1867-1934) is universally acknowledged as the first master of both the comic strip and the animated cartoon. Although invented by others, both genres were developed into enduring popular art of the highest imagination through McCay's innovative genius. Before his remarkable Litttle Nemo in Slumberland, McCay created two strips starring young children. From the publishers of the widely-acclaimed deluxe reprint Little Nemo In Slumberland: So Many Splendid Sundays!, this book features all of the Little Sammy Sneeze color pages (1904-05) plus Hungry Henrietta, McCay's other comic, which appeared on the back of Sammy in the Sunday New York Herald. The unique style of this book presents two other "flipside" comics of 1904: The Woozlebeasts and The Upside Downs, along with the complete 27-chapter saga of Hungry Henrietta. All comics are digitally restored in the original size and colors. Hardbound.

From Winsor McCay, creator of the world-renowned "Little Nemo in Slumberland," comes the improbable adventures of Little Sammy Sneeze. He simply couldn't stop it, he never knew when it was coming his potent sneezes, that is, causing everything from minor irritation to hurricane-like devastation. Here is a complete collection of the Sunday Comics from 1904-1905. The book also features the actual reverse side of the original comic strips including McCay's "Hungry Henrietta," the nonsense-limerick strip "The Woozlebeasts," and the amazing fantasy of Gustave Verbeek's "Upside-Downs" and "Terrors of the Tiny Tads." A marvelous collection of early American comic strips digitally restored and presented in their original size and colors.


We accept Visa, Mastercard, American Express, PayPal and international money orders (must be for full amount owed in UK pounds).

All our books (new and out-of-print) are in EXCELLENT as new condition (unread) unless stated otherwise in their description. If a book is not as described, please advise us and return within 14 days for a full refund.

Most orders are received next working day (UK) or 5 working days (outside UK), although you should allow up to 28 days for delivery. All books are despa...

All our books are carefully packed. Because most of our books are higher value and tend to be heavier (especially when packed) we usually use Priority international shipping by air courier which is insured at our risk; Standard shipping (where offered) is not insured and is sent at your risk!

ABE shipping costs are based on books weighing 2.2 LB, or 1 KG. We offer a fair degree of leeway but many of our books are substantially larger and heavier than the norm. If your book order is significantly heavier or oversized, we may contact you to let you know extra shipping is required.